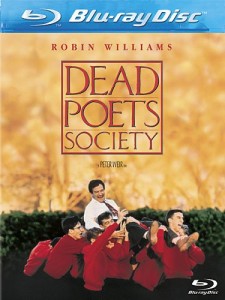 ‘Dead Poets Society’ is a modern classic.  I loved this film when I saw it back in the late 80’s and I still love it today.  Robin Williams leads an all-star cast….well back then they were mostly unknowns, but today, they are A-List actors, in one of the best coming of age films and one of the best films that takes place at a boarding school. The extras on this disc are great and new HD transfers are really good.  I loved seeing this on bluray it all its 1080p glory.  Definitely worth picking up.

‘Dead Poets Society’ is such a wonderful tale of a group of kids who attend a wealthy boarding school where Robin Williams enters the picture and teaches these kids to start thinking for themselves.  No, it does not have a terrorist plot like ‘Toy Soliders’, nor kids who hate Jews (School Ties), but rather this tale is about kids who just love to read fiction and love poetry.  But since they go to a strict school, they are almost forced to not think on their own, but are told what to think by the higher ups.  That is until Robin Williams comes in as a former student to teach.  He opens up the kids minds to learn and think for themselves.  He mentions that when he went to school, there was a secret club that would meet off campus and read poetry together and that he was a part of it.  Some of the kids decide to reopen this club called the dead poets society. By doing this, most of the kids learn life lessons about girls, and try and grow the courage to do what they have passion for in life and not what is expected by their parents.  This proves tragic for one students and the worst of the worst happens, thus some severe consequences happen where the kids must choose between doing what they love or not.  I’m sure most of you have seen this film.  It grossed almost $250 million and even won an Oscar for best screenplay.  The acting from Ethan Hawke  and Robin Williams is amazing.  Williams tones it down for this film and is not his silly self he is known for.  Rather he is very charming and extremely likable in this film.  If you have not seen this film, you need to get this film.  Wonderful on all levels. 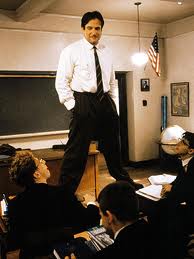 For a film that is about 22 years old, ‘Dead Poets Society’ looks amazing.  There is no noise or edge enhancement that I noticed.  The blacks run deep and inky and the colors are somewhat vibrant.  It’s a very fall-esque looking film, meaning lots of reds, browns, and oranges from the school colors and the dark wood desks.  The tones are natural and the depth is great.  While being a high def transfer, there is a look to the film that still looks like it was made back then.  So the nostalgic fans will love that.  There is some softness to the presentation which can make the film look a bit flat at times, but overall the film looks amazing.  The audio has a new DTS-HD 5.1 mix. This was originally mixed in stereo when it came out and has been nicely rejuvenated for this new release.  This is not an action film at all, so don’t expect tons of bass and thunderous noise with this film.  But the dialogue is perfectly clear and crisp with not hissing of any kind.  The score and great songs from the era of the film play nicely on all speakers.  This is mostly a front speaker heavy film, but you will get a little use from the rear speakers.  A good job on the audio. 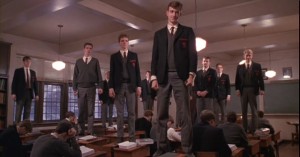 THE ULTIMATE WORD
‘Dead Poets Society’ is an amazing film.  It should be seen by all.  The extras are pretty good, and the audio/video presentations are great considering how old the film is.  This is a must have for anybody who loves movies, poetry, and a good story.  It’s one of the best coming of age stories there is.  I highly recommend this bluray.  Loved every minute of it.
-Bryan Kluger