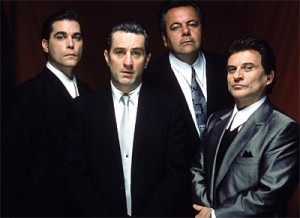 AMC will be in business with some ‘Goodfellas’ in the near future.   That’s right, the Martin Scorsese 1990 film ‘Goodfellas’ will be turned into a series for AMC.  The series will take place in the general time era that AMC’s ‘Mad Men’ takes place.  And Nicholas Pileggi, who wrote the movie based on his non-fiction book Wiseguy, is on board to co-write the TV series adaptation with TV writer-producer Jorge Zamacona (Homicide: Life On The Street). The two will executive produce with the film’s producer Irwin Winkler and his son David.

I know that Pileggi has been wanting to turn ‘Goodfellas’ in to a series for sometime, and it seems like the time has finally come.  The movie ‘Goodfellas’, which Pileggi co-wrote with Scorsese, stars Robert De Niro, Ray Liotta and Joe Pesci and follows the rise and fall of the Lucchese crime family associate Henry Hill (Liotta) and his friends from 1955 to 1980. It was nominated for six Oscars, including Best Picture and director, and won one, for best supporting actor (Pesci).  It’s going to be hard to compete with the film, but let’s hope Scorsese is on board to exec produce and direct the pilot.  I think this could be great.  Your thoughts?