There is a Director for the ‘Police Academy’ Remake!!! 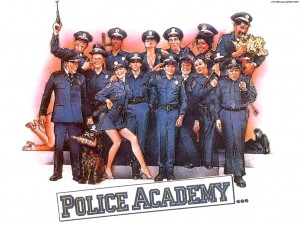 That’s right.  There will be a remake of ‘Police Academy’.  And New Line Cinema has chosen its director which will be Scott Zabielski.  This will be Scott’s first feature.  He has previously directed a few episodes of the Comedy Central series ‘Tosh.0’.  Also, Scott went through the police academy and is a reserve police officer in West Hollywood.  So I imagine he will be drawing a lot from personal experiences.

It’s going to be hard to replace a lot of these original actors from the original ‘Police Academy’ films.  I wonder if any of the original actors will make cameo appearances in the remake, and I wonder if they are shooting for a franchise film series like the original.  For some reason I always thought ‘Reno 911’ was sort of an homage to the police academy films, and maybe a remake at this point in time would be overkill.  I just hope Guttenberg and Michael Winslow have cameos.  Your thoughts?