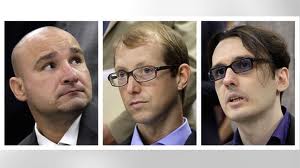 The West Memphis 3 (Damien Echold, Jessie Misskelley Jr., Jason Baldwin) will be in attendance at the New York Film Festival to screen the third ‘Paradise Lost’ documentary about their trials and the last 18 years they spent in prison for a crime they did NOT commit.  The West Memphis 3 will get to see in person the recut version of Joe Berlinger and Bruce Sinofsky’s documentary about themsevles — the one that has been recut to reflect the trio’s release from jail.

This third documentary originally premiered earlier at TIFF but with the original ending which was shot before the trio was released from prison.  This new version will be the first time anybody has seen the new footage.  Meanwhile, there already is a feature film in the works with Atom Egoyan directing; Devil’s Knot is set to begin shooting in the spring.

Said Berlinger in the press release announcing the NYFF news: “What a remarkable opportunity to celebrate the power of cinema by having the subjects of these films — one of whom just six weeks ago was on death row and the others locked away for the rest of their lives — on hand to meet the audience who will witness their 18-year wrongful conviction odyssey on what is sure to be a monumental occasion for everyone involved Monday evening.”

So happy for these guys.  I wish them the best.