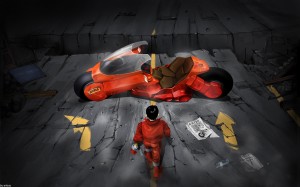 I know what you’re thinking. I can read your mind. I am peering into the vortex of your psyche…

No question mark. Just flat-out “what.” Yeah, that’s what I was thinking too.

Akira, originally made in 1988, is the anime cult classic that really brought the genre to America. It’s a sci-fi, cyberpunk epic about two boys who follow very different paths. One, the leader of a biker gang, must save the other from the government’s cruel experiments when he shows potentially dangerous psychic powers. Made when animation was still fairly so-so, Akira broke down the barriers keeping America from sampling the beauty of Japanese anime.

In July, Warner Bros. got Jaume Collet-Serra (Orphan) to direct the traves—I mean remake, with a budget of $90 million. Have they seen the original? It will take more than that to make the futuristic set, much less keep Akira’s blobby self from looking like Green Lantern’s Parallax – that is, keep it from looking like the CGI it will have to be. Luckily, the budget is not final.

Casting has begun, with Tron: Legacy’s Garrett Helund a front-runner for one of the male leads. No offer has been made yet to him, but it should be along soon.

Albert Hughes was supposed to direct, but he fell out early. Collet-Serra was dragged aboard quickly, but the budget planning took another couple of months. Leonardo DiCaprio (I don’t really have to tell you what he’s in, do I?) and Jennifer Davisson Killoran (Red Riding Hood) will produce.

I’m not saying it’s going to be bad. The worst part about all this is that it’s probably going to be awesome, with cutting edge special effects and actors who can really make us feel for them. The film has so much potential. I just hold a personal opinion that some films should not be touched, and Akira is one of them.