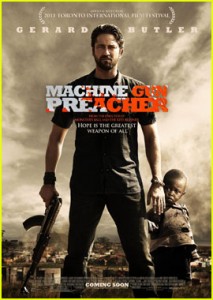 Machine Gun Preacher.  Unfortunately, here’s what I have to say about this film….

The audience clapped at the end of the screening.  Overall, it would appear that people were receptive to the portrayal of Sam Childers’ story on the big screen.  The story itself may be quite compelling, but unfortunately, it did not translate well onto the big screen.

The long and short of it, bad man does drugs and crime and motorcycles, he goes to church and finds God, he goes to Africa and witnesses horrible things, now he kills rebels and saves children.  Yes this is the foundation for an incredibly story if done properly, but unfortunately, it felt like the entirety of the film was about as deep as the summary above.

The one thing that it did brutally well, almost too well, was the depictions of violence.  If the film’s purpose were to make you feel horrible for the injustices being done in the world, and to see with your own eyes what violence against women and children looks like, then it succeeded.  And I’ll reiterate, it did this almost too well, to the point where it nearly filmed a bit like a snuff film.  And the thing is, it seems without purpose.  The horrors are real, and I understand that we need to be aware of them, but well, if a little effort would have been placed on the screenplay, or direction, or acting, then maybe it could have counteracted the brutality with a depiction of humanity, but it doesn’t…at all.

The film is essentially a montage of superficial clichés provided by Gerard Butler who obviously placed too much effort on making us believe that he’s a hillbilly and not enough effort on making us believe that he is a caring person with a purpose. The script reads onscreen exactly as would poorly edited memoirs. We see the moments that a man remembers as significant in his life, they are overdramatized in his mind, have little basis in reality, and cannot cause the audience to identify or believe anything you see.  Every scene is overacted and has no connection from one point to another.

Finally, and what is probably the biggest travesty, is that the most believable actors in the film, the African people made the basis of this film, were likely the least compensated in the film.  Their portrayal of life in East Africa was the only part of the film that caused any real emotional response, and we all know that they got chump change, if that, for their work.

It was a good idea with good intentions that was just poorly executed.  It’s unfortunate, really, because I’m sure that Sam Childers is a man who has done something impressive, but really, the real life footage of Mr. Childers that ran through the credits was a better and more emotional experience overall than the two hours that preceded it.