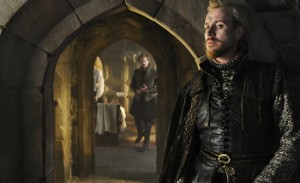 This hurts because it could have been great, but…….

So, you know how every time there’s a new Roland Emmerich movie out, you get all excited because you know that you’re gonna go to the theater and goof off with your friends and eat some hot dogs and candy and probably goof off some more until all of a sudden there’s gigantic explosions and the world’s ending (again) and then there’s more dumb storyline and bad acting and bad directing but you sit there because you know the explosions are coming back.

Ok, now, imagine you go to a Roland Emmerich movie and there’s no explosions….Ladies and gentlemen, welcome to “Anonymous.”

This movie had so much potential, but, in classic Emmeric style, the previews looked so much more substantial than the film itself.  I was actually convinced I would love this film when he opening scene is presented in quite an original and brilliant fashion, paying homage to the theater and how important is still is in the arts today.  Shortly after, we are brought back to the time of Shakespeare and are the taken back and forth through two timelines, which, in an incredibly jumbled manner, explain the story of how a Baron or Duke or Earl or Duke of Earl is an incredible writer who is shunned and uses Shakespeare as his flesh and blood ghost writer.

So, you see, it sounds brilliant.  Unfortunately, Roland Emmerich, and I normally love him, can’t direct anything with a pulse.  When it comes to storytelling, his timing is wayyyy off.  Usually these are things I can deal with in an Emmerich film, but the whole point of this was that it was his attempt at a serious, historical-ish film with no explosions.

I’m sorry, cast and crew, but here goes….Whoever designed the sets and costumes just slightly missed the mark enough for you to deny the reality of the sets and costumes.  I don’t even remember the musical score anymore.  The lines were over dramatic and probably even overly “time perioded.”  The actors all pretty much gave no delivery, except for whoever it was that played Shakespeare, he was quite memorable…but that’s about it.

Somehow, honestly, I did still find some good in the film, though I doubt you’ll believe that after all the stuff I just wrote.  But, like I said, it’s a good premise, definitely has its impressive moments, some pretty visuals, and really tries to pay its dues to the arts.  Ultimately, this may have worked in the hands of a different director.  So, in summation, Roland, please, I’ve been saying it for years, just blow stuff up.  You do it well.  Destroy the world again, we love you for it.