Bryan Tries To Be Anonymous with ‘Anonymous’!!! (A Movie Review) 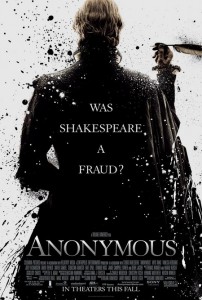 Finally this film got made.  ‘Anonymous’ has been in the hands of director Roland Emmerich for almost a decade.  He has wanted to make the film for quite some time, but has never found the proper funding nor right studio.  Well his dreams came reality and he finally go to make the film he wanted.  Emmerich is most known for directing ‘Independence Day’, ‘2012’, ‘The Day After Tomorrow’, and ‘10,000 B.C.’.  Not exactly quality films.  I will say this is the second best of Emmerich films.  Second to ‘Stargate’.  But that’s not saying much.  ‘Stargate’ is AWESOME.  ‘Anonymous’ is not.  Anonymous’ at best is a jumbled and confused decent attempt at a great film.

‘Anonymous’ tells the conspiracy story of how William Shakespeare did not write any of his poems, sonnets, or plays.  Rather this version of the conspiracy theory says that The Earl of Oxford actually wrote them.  In other theories, a few other prominent names are mentioned to have written Shakespeare’s work.  But in ‘Anonymous’, the Earl of Oxford wrote them.  Rhys Ifans (Notting Hill) plays the Earl of Oxford and in my opinion deserves an oscar nod for his work in the film.  He is brilliant in this movie.  Emmerich has said in interviews before that he never liked Shakespeare or reading any of his plays or poems.  None ever stuck with him.  Then one day a friend of his told him about this theory and then he wanted to make a movie about it.  The whole thing seems kind of strange to me.  Why would someone want to make a film about something they don’t care for really?  But Emmerich did.  Which is fine. It is clear that Emmerich believes 1000% that Shakespeare didn’t write his own work and whether or not you choose to believe or not, the film has its good moments, but comes across as inconsistent and sloppy.  I found myself a bit confused through the first half hour or so of the film because it jumped time frames several times and was a bit distracting trying to figure out who everyone was in these different times.  Once the film ceased time traveling, things fell into place, but was just poorly executed.  Everything seemed jumbled and over too quickly.  However there are some really good things about the film.  The acting being one of them.  Rhys Ifans, Joely Richardson, and Vanessa Redgrave are amazing in their roles.  They bring a lot to this film, but sadly the script and story couldn’t provide more for them.  I was very surprised to see Rafe Spell play the role of William Shakespeare.  Rafe was one of the Andys in ‘Hot Fuzz’.  That was awesome.  I totally recognized him right away.   That’s the geek in me.  Another great thing about ‘Anonymous’ is the sets and costumes.  The theatres and the old Victorian buildings and villages were spectacular.  Of course there is a lot of CG, but I do know that quite a bit of actual 1:1 scale models were built for the film.  It looks fantastic.  If you are a fan of Shakespeare or a fan of the time period, you will probably enjoy watching this.  Also, if you are a fan of the theatre, you might enjoy it too, but personally, I just didn’t like the way Emmerich portrayed Shakespeare which was an illiterate struggling asshole actor.  The visuals are amazing and the acting is worth watching it for, but overall ‘Anonymous’ is a mess.