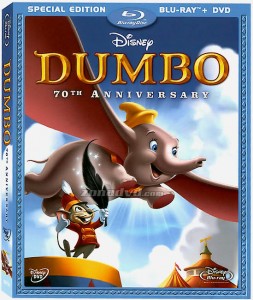 This my absolute favorite all time 2D Disney animated film.  It doesn’t get better than this.  For the first time ever, in celebration of this landmark film’s 70th anniversary, experience the daring adventures of the world’s only flying elephant with a dazzling all-new digital restoration and brilliant Disney enhanced high definition theatre mix sound. The inspirational tale of Dumbo, the courageous baby elephant who uses his sensational ears to soar to fame with the help of his clever best friend Timothy Q. Mouse, will thrill and delight audiences of all ages. And now, the award-winning music and empowering messages about friendship and belief in yourself reach new heights in this must-have Blu-ray high-definition presentation of Walt Disney s animated classic Dumbo!  This is the best this film has ever looked.  So crstal clear and the sound is even better.  Must own definitely.

‘Dumbo’ is my absolute favorite 2D Disney animated film.  It is also one of the strangest animated films ever to come out of Disney.  It was definitely ahead of its time coming out in 1941 with a running time of just 64 minutes. Dumbo proved to be a huge success for Disney and might have saved Disney from going under due to a few previous poor box office receipts from past years.  Dumbo changed all of that.  ‘Dumbo’ also told its story with very little dialogue and with more animation and character expression.  And let us not forget the Pink Elephants on Parade acid sequence in the middle of the film.  This sequence alone is one of the most trippy and psychedelic abstract pieces of animation ever to come out of Disney.  And what sucks, is that Disney has never tried to re-create that sequence ever.  ‘Dumbo’ is one of the sweetest and heartwarming films I have ever seen.  I just love when Dumbo is getting a bath from his mother.  You can actually feel the love from those two characters radiate from the screen.  Everything about this film is pure emotion and bliss.  I could watch this film every day for the next ten years and then some.

I can’t believe this movie is 70 years old.  ‘Dumbo’ looks amazing for being 70 years old.  ‘Dumbo’ is presented in 1080p HD with a 1.37:1 aspect ratio.  The colors are very vibrant and is the best the film has ever looked.  The picture is sharp, clear, and very smooth.  Everything pops and overall just comes across as a beautiful upgraded masterpiece while have that nostalgic vintage Disney animated feel.  The audio mix has been full remastered with a lossless 7.1 DTS-HD mix.  Needless to  say it sounds full, dynamic, and crustal clear.  There is also an option for a lossless 2.0 mono track for those people who want to be authentic to the time.  But the dialogue and sound is full and just pristine.  Most of the bass and full sound comes on the Pink Elephants on Parade.  This is definitely the best ‘Dumbo’ has sounded.

‘Dumbo’ is my favorite.  It doesn’t get much better than this folks.  The audio/video is superb and top notch.  There is a huge treasure trove of extras to tickle your fancy, and the whole film itself is one of the best most endearing stories ever created.  This release gets my HIGHEST recommendation.  A must own.  I love this film and I know you will too.