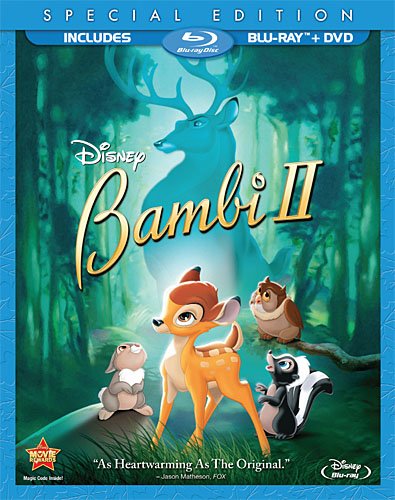 As of recently, Disney has been pumping out all their catalogue direct to home video releases on blu-ray.  This 2006 film really isn’t a sequel or prequel of sorts, but rather a story from the first film’s time frame.  I just say, since 1994 when Disney started all of these direct to home video releases, ‘Bambi II’ is one of the better ones.  Now that’s not saying much since most of their direct to video films are not that fun to watch with the exception of ‘Lion King 1 1/2’, it also isn’t the worst one.  There is enough fun and adventure in ‘Bambi II’ that it entertained me and I would consider watching again at some point in the far future.

‘Bambi II’ takes place during the first film’s time frame before Bambi becomes and adult and sometime after his mother dies.  It also has a hipper tone and feel to it to appeal to modern day audiences.  The characters come across a little more audacious along with plenty of toilet humor.  So after Bambi’s mother’s death, Bambi spends a lot of time with his father (Patrick Stewart) who is trying to teach Bambi how to be a prince and be responsible, but Bambi would rather play with his friends.  Bambi’s father is trying to teach Bambi that there is more to life than just playing and running around.  I kinda felt a ‘Lion King vibe throughout this.  Humans once again try to kill the forest animals and destroy the trees and wildlife by setting traps and forwarding their own selfish ways.  Bambi needs to lear that he must take that step to become prince of the forest and his father must lear to relax once in a while.  It’s an all around feel good movie with lessons and laughs.  You won’t see this trying to up the original or nix anything that happened in the original film, but rahter, you will see an updated modern story of more of the lie of Bambi when he was younger.  The young ones will enjoy it and it definitely comes across as one of the better direct to video Disney movies. 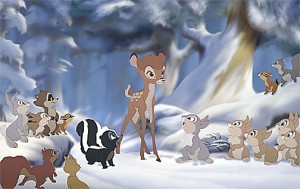 The video is presented in a stunning 1080p hi-def 1.78:1 presentation and is just all out beautiful.  Not one single flaw I could see.  Everything is crystal clear and the colors are amazing.  The colors burn vibrantly across the screen and the edging is completely defined.  The blacks are inky and run deep as well as the over clarity of the picture, it’s all just blissfully wonderful.  This all is true while still looking like a real 2D Disney animated film from the classic years.  The audio has a 5.1 DTS-HD lossless mix and sounds just out of this world.  The dialogue is amazingly clear and comes across on the center channel perfectly.  The more action packed sequences allowed my sound system to get a full use and evenly distribute all the animals and wilderness sounds.  The score sounds fantastic as well.  Overall a well rounded and pleasurable sounding and viewing experience.

Out of a ton of pretty bad direct to video sequels of Disney classics, ‘Bambi II’ is one of the better ones and has a lot of fun.  I enjoyed hearing Patrick Stewart and watching the modern day animation.  The audio and video is top notch and the extras while brief, are informative and fun to watch.  The kids will love this film and I must say myself didn’t mind watching this as well.  If you are a fan of Disney animation and Bambi, then this is a no-brainer.  A must buy.