Behind the Candelabra: The Liberace Movie IS Actually Happening!!! 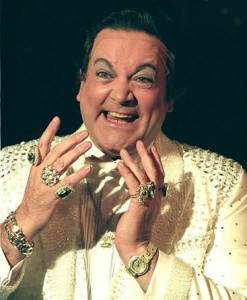 Oh good. I was starting to get worried.

Mostly because my mother, who was ridiculously excited about the film, was starting to get worried, but I do love a good Michael Douglas flick. And Matt Damon is adorable no matter how you swing. Plus, we get to watch Michael Douglas swing towards Matt Damon! After seeing Robert De Niro pull off flamboyant (in 2007’s underrated Stardust) I’ve had an odd but acceptable desire to see other ladies’ men jump the fence for a flick.

It’s been done, of course. Hugo Weaving (or, you know, creepy-as-sin Agent Smith. Or Elrond, whichever side of the sci-fi fandom you happen to frequent), for example, made a marvelous drag queen in 1994’s The Adventures of Priscilla, Queen of the Desert. But Michael Douglas is married to one of the most beautiful women in the world, has played one of the most dastardly villains (Gordon Gekko, Wall Street) in screen history, and by God I want to see him FLAME.

HBO is the saving grace here, pushing a green light through. To be honest, the switch from Warner Bros. to HBO might turn out to be a godsend for a movie about Liberace. With their love of originality and large audience, HBO is perfect for filming a spectacle. And let’s face it: we’re talking about Elton John’s idol. “Spectacle” is only the beginning.

With the advent of such eccentric artists as Sir John, Lady GaGa, Ke$ha, and Katy Perry, Wladziu Valentino Liberace has mostly been forgotten by the younger generation. What haven’t been forgotten are the many lawsuits he was involved in (welcome to America), one of which is the basis for Behind the Candelabra. The movie will chronicle Liberace’s (Douglas) life with his limo driver and live-in lover, Scott Thorson (Damon), who filed a lawsuit against him due to a bad breakup. It will be dramatic, there will be great music, and Michael Douglas will FLAME. I see no problems here.

Oh yeah, and Steven Soderbergh is at the helm. Ocean’s Eleven, Erin Brockovich, Traffic (that last one there got him an Oscar.) He’s worked with both Douglas and Damon before; reunions such as this in the film world are usually good news. The producer is Jerry Weintraub, another familiar face for both the director and the actors. Soderbergh and Weintraub had actually been working on this project for about four years, but Douglas’ unfortunate cancer issues stopped production in its tracks. Now that he’s back, the show can go on.