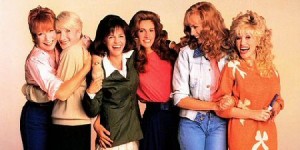 In 1989, Herbert Ross directed a chick flick entitled Steel Magnolias and wowed America with an all-star cast. Dolly Parton, Sally Field, Shirley MacLaine, Daryl Hannah, Olympia Dukakis, and new-at-the-time Julia Roberts played the titular tarts and used their acting chops to save a movie that could have been the most melodramatic film of the 80’s (which, let’s be frank, would be saying something.) Steel Magnolias pushed past its flaws and became a classic.

One might have wondered when it was all going to come around again. After such Southern-belle-based successes as The Divine Secrets of the Ya-Ya Sisterhood, The Secret Life of Bees, and most recently The Help, there was bound to be a Magnolias remake lurking under Hollywood’s bed. Oddly enough, it wasn’t Hollywood that snatched it up.

Lifetime’s got the goods, and they’re going for the green light. The movie will be set in modern-day Louisiana, and the bonds between the women will be explored in much the same way as in the original. The beauty parlor, for example, will mostly likely be in full effect.

“This is all well and good,” you’re potentially thinking, “but who will fill the shoes of those aforementioned dames?”

Much of the film’s details are still in the works, but one thing has been confirmed: all of the shoe-fillers will be black. There are some serious African-American powerhouses out there, and director Kenny Leon wants to take full advantage of them – big names only. He pulled out a few stops with 2008’s Lifetime feature A Raisin in the Sun by casting Sean “P. Diddy” Combs, but he’s pitching in a whole new ball game with a bigger movie like Magnolias. Those who loved the original will not expect anything less than household name stars like Queen Latifah and Beyonce’.

Leon can probably pull it off. A Raisin in the Sun is a complex and emotional story, and if he can do it successfully, Magnolias is right up his alley. The fact that the women are the core of the story also won’t hurt, as the women in Raisin were similarly the shining stars in that project (though that was probably due in part to the fact that they were acting next to a rock…I mean, Sean Combs. I swear the man doesn’t have the facial expressions God gave a wall.) All in all, Leon has this reporter’s confidence.