Learn What Happens on the First Few Episodes of HBO’s ‘How To Make it In America’ Season 2!!! 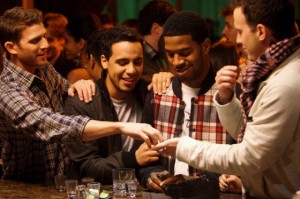 Who will you become to get what you want?  That’s the question facing enterprising twentysomethings Ben and Cam, as they continue to pound the pavement in New York to make their dreams come true.

Back in New York after a potentially lucrative trip to Japan, Ben Epstein (Bryan Greenberg) and Cam Calderon (Victor Rasuk) hit the ground running, hustling for every opportunity.  The partners scour the downtown scene for new business connections, following every lead they can to get noticed in the ultra-competitive fashion industry and make headway with CRISP, their homemade fashion line of T-shirts and hoodies.  As the stakes get higher, these charming entrepreneurs confront new obstacles in New York City, determined to achieve the American Dream.

Ben (Bryan Greenberg) and Cam (Victor Rasuk) return to NYC from a successful trip to Tokyo full of optimism – and with duffle bags of hoodies for a CRISP pop-up store event.  Back from her soul-searching globe-trot, Rachel (Lake Bell) realizes she still has feelings for Ben, but discovers he’s seeing Julie (Margarita Levieva).  Rene (Luis Guzman) puts up a head-turning Rasta Monsta billboard that incenses his girlfriend; Domingo (Scott Mescudi aka Kid Cudi) expands his business beyond dog-walking.

Ben and Cam find themselves stuck between their new sales rep and a hard place when they have the opportunity to crash a brunch hosted by the well-connected Nancy Frankenburg (Gina Gershon).  On the personal front, Cam is determined to move out of his grandmother’s place, and Ben makes an indifferent step toward commitment by giving Julie his spare key.  Rene leans on an indebted client to pay up, but not with money; Rachel lands a new job at Biscuit magazine, and lights up with Domingo.

Fashion rep Nancy lands CRISP a promising gig, though not for the money or clientele Ben and Cam had hoped for.  Rachel bestows a lavish gift on Ben after learning that he and Julie may be parting ways.  Cam goes into the dealing business with Domingo to help raise money for a river view apartment.  Rene shoots a Rasta Monsta viral video with Wilfredo Gomez (Javier Nunez), and gets closer to his girlfriend Debbie (Andrea Navedo).

At an upstate wedding, Ben’s platonic friendship with Rachel is tested by nostalgia – and a revelation about the new guy she’s been seeing.  Meanwhile, Kapo (Eddie Kay Thomas) stresses about speaking from the heart in his best-man speech.  Cam charms Lulu’s (Nicole Laliberte) dad (Joe Pantoliano) to secure the perfect location (and an unlikely model) for CRISP’s new ÒlookbookÓ photo shoot.  Rene seeks to collect on a debt to cover the costs of Rasta Monsta’s expanding business (and to buy bling for Debbie).

After Nancy puts the kibosh on getting CRISP into a large midwestern retailer, Ben and Cam take matters into their own hands to charm its young out-of-town buyers.  Rene tries to make amends with Debbie and prove he can be a stable family man; Rachel goes from feeling lost at Biscuit to alive in Bushwick, all in a single day.