FedMex loves Everything About ‘Drive’!!! (A Movie Review) 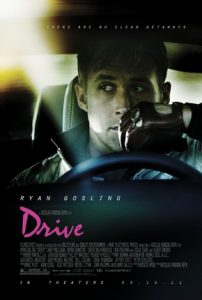 If you like to be taken completely off guard by a film when you go into it, you might want to stop reading now.  I’ll try to stay away from  giving too much away, but Drive was an experience that I was completely unprepared for, and I’m much happier that I came in knowing nothing before watching this.  Let’s see what happened…

First of all, my first thought, Ryan Gosling? Ryan Mr.-Sentimental-Ultimate-Hipster-Why-The-Hell-Did-I-End-Up-Sitting-Through-The-Notebook-Though-I-Admit-I-Loved-Lars-And-The-Real-Girl-WTF-He’s-Banging-Eva-Mendez-Now Gosling, is supposed to be some sort of criminal anti-hero that I’m supposed to believe in?  Well shit sheriff, I believed it.  Entirely, completely, in every way believed in Ryan Gosling in this film.  Why, you may ask?

Well, the film is in its entirety a brilliant piece of neaveue-noire that I can only describe as a perfect combination of a gritty, dark, atmospheric feel with throwback 70’s nostalgia in a modern setting.  The film points its entire focus not to a script full of witty banter, nor to a crime story that is completely new, but rather to an interpretation and rendition that uses little dialogue to show emotion and truly places faith in its actors to bring the audience into their confused worlds.  And here’s where Ryan Gosling DELIVERS.  He has always used that irresistible mug of his to swoon women and show how much he can care and hurt, but here he can show how much he can care, hurt, and impose serious amounts of pain and rage!  It was completely surreal.  His silent stoicism conveys just about every emotion that can be experienced by a man and throws it on the screen in an impressive tour de force.

The supporting cast follows suit and never states an unnecessary word.  I don’t know what kind of magic director Nicolas Winding Refn used on his cast to make them nearly flawless mechanisms of emotion, but even the most minor supporting character spoke a thousand lines with twitch of the upper lip and a squint of an eye.

This was a completely emotional film, with a surprising touch of excessive gore.  You will enter a criminal world that will shock you, scare you, tense you, cause you to empathize, and even fall in love once or twice.  Be prepared for an experience unlike any presented on film this year, and honestly quite unlike anything I’ve ever seen.  I left the theater literally speechless, and I will undoubtedly be going back to see this again.