Okay, so this past episode of True Blood was less than stellar. It has been a while since my favorite vampire show since Buffy has bored me, but like I said, it was less than awe inspiring. But hey, I will be the first to admit, I was hoping for something more, so my expectations where a little raised because of last week’s episode. I kept waiting for something to happen, and it never really did. Sure, I’m impatient at times and yes I guess important things did happen this episode, so lets get on to the recap:

Their house mysteriously caught fire. But the big shocker was that the ghost we see is not Rene at all but a thin black lady. Makes one wonder, it really does. And I’m waiting to see how the creepy doll plays into all of this.

Tara spent the episode introducing her Bon Temps life to her girlfriend. Looks like these two kids are gonna be okay. Well, if Pam doesn’t eat them first that is. Cuz last we see them, our rotting friend had brought fangs to bare and looks like she was going in for lunch.

We don’t see much of Sam this week. He shows up to help with Arlene and Terry’s house, promises to go running with Tommy that night (Full Moon and all) and that’s pretty much it. He does show up at the end to take care of Tommy, who has passed out in a puddle of his own vomit.

Tommy did have a big week. After hanging up with Sam, the young shifter somehow shifts into Sam. He then goes about and messes up many elements of Sam’s life. He fires Sookie when she asks for some time off, and most importantly, he has sex with Sam’s girlfriend and then pretty much throws her out on her ass afterwards.  I am of the thought this wasn’t what he had originally planned. I do believe he more wanted her out of the house because he felt he was about to change back to himself and wow that would have been awkward.  After she leaves he shifts back into himself and proceeds to throw up in the sink and pass out.

Jesus’s grand daddy tells Jesus that he requires a sacrifice before he will help them. And wow, a rattle snake is what they get. Grand Daddy then makes the snake bite Jesus, tells LaFeyette to protect Jesus and then buggers off. Lafeyette is then possessed by Jesus’s uncle and magicy things happen.

Marnie becomes possessed by the necromancing spirit of Antonia while still in vampire custody. We also see that one of the Louisiana sheriffs was one of the vampires that abused her when she was in captivity in 1600’s Spain. Antonia also shows us that she can control vampires by taking control of this sheriff and making him kneel before her.

Guess who isn’t a were-leopard? Turns out, a human can’t be infected with were anything. It is a genetic trait that is passed on. Jaso and Jessica do have a bonding moment. Jessica sensed Jason’s panic and ran to him thinking she would be saving him. Instead she decided to stay with him incase he did turn.

Debbie wants to join the Shreveport pack. Alcide doesn’t really want to, but decides to look into it to try and help Debbie stay sober. The pack master does apologize for going all alpha on Alcide and invites him to join the pack stating that the pack needs a wolf like Alcide in its ranks.

Bill does find Sookie and Eric in each other’s arms about to really get it on. He takes Eric into custody and has Sookie thrown off his property stating if she returns to have her arrested for trespassing. He also embellishes the story to get permission to kill Eric. But seeing a different side of Eric, releases him. 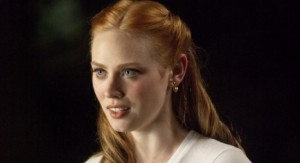 As stated before, Eric is taken into custody. He is put into a cell with Pam and we see that Eric does not want to have anything to do with his previous self. He says that the Eric of the past is not someone he wishes to know. When Bill asks him about last words, Eric says he will not defend the actions of his formerself but he does request that Bill take care of Sookie because she deserves happiness from whom ever can give it to her. He also asks for mercy for Pam because she is rotting and won’t be a threat for long at the rate she is decaying.

After being ousted from Bill’s residence, Sookie goes to find her brother. Who she finds has handcuffed himself his bed. She uncuffs him and next we see them sitting talking. Jason gives her the slip and she runs off into the woods with a shotgun under the light of a full moon. It’s kinda funny actually. In her wanderings she runs into Alcide and Debbie, who inform her that being a were animal is genetic not a virus. (Good news for Jason). But later in her wanderings she finds Eric, who tells her that Bill released him. The two then fall into each others arms and make sweet love under the light of the full moon.

Like I said, some good things did happen, but I was really let down by this episode. Might be my own anticipation of something big to happen. Again, it feels as if the show is doing too much. Heck, we haven’t heard from the people harvesting fairy folk in a while, surely they are upset that one of their own has been killed? Or did they just cut their losses and say let the witches and the vamps fight it out? What ever the case maybe, if the teasers from next week’s episode are any indication of what’s to come, I may get my wish and see something REALLY interesting happen.

See you ghouls next time…