I know growing up, I read Richie Rich.  Then the film came out with Culkin and it satisfied every kid’s dream.  A rollercoaster in your backyard, a MacDonald’s in your house, and who could forget that chase scene at Mt. Rushmore.  Well it seems that Classic Media and Ape Entertainment have teamed together and will bring the public two different ongoing titles of the Richie Rich franchise.  Read the press release below.

San Diego, CA (August 01, 2011)—Ape Entertainment and Classic Media are pleased to announce two new ongoing Richie Rich® titles.  Due to the overwhelming success of the initial limited series, the first of Ape’s new ongoing titles under the KiZoic “young reader” imprint will be “RICHIE RICH: Rich Rescue”. The 2011 mini-series featured an updated globe-trotting version of Richie Rich and friends traveling the world helping those in need.  Responding to fan and retailer demand spurred by the success of the re-envisioned Richie Rich, Ape Entertainment will revive the classic title “Richie Rich GEMS” as an ongoing series to reprint classic Richie Rich stories originally published by Harvey Comics. 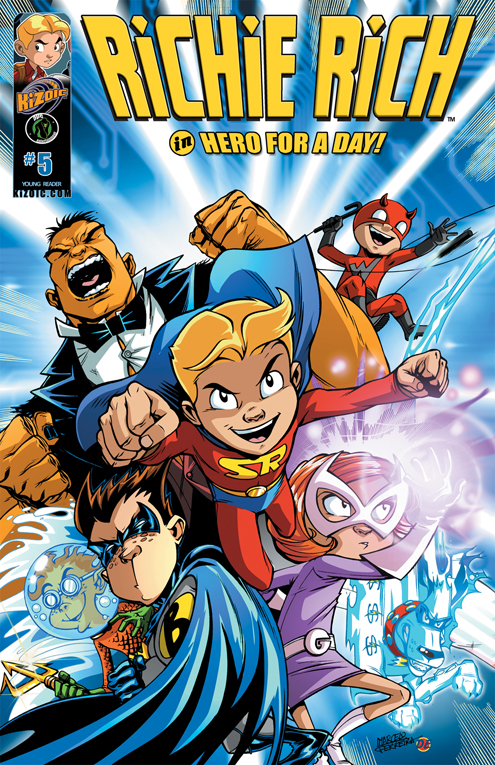 “Our fans and retailers have spoken and they are thrilled to have Richie Rich back,” says Ape Entertainment COO Brent E. Erwin. “We have been receiving a ton of comments from them telling us how much they enjoy the newRichie Rich.  Retailers have been asking us for a reprint title in standard comic format, so we are pleased to be able to offer them Richie Rich GEMS once again” commented Erwin.

With the return of “Richie Rich GEMS” (28 pages priced at $3.99), Ape will pick up and continue the numbering with issue #44 where the original series left off. The GEMS title will reprint classic Richie Rich stories from previously published Harvey Comics titles, and the stories have been re-colored to accommodate the higher quality printing practices of today’s market. In addition, each GEMS issue will also feature a brand new “Classic Richie Rich” story by legendary creators Sid Jacobson and Ernie Colon.

Scheduled for a November 2011 release, “Richie Rich: Rich Rescue” #5 (28 pages priced at $3.99), will feature a “Super Hero” parody sporting 3 classic homage covers, one of which is a special retailer incentive. 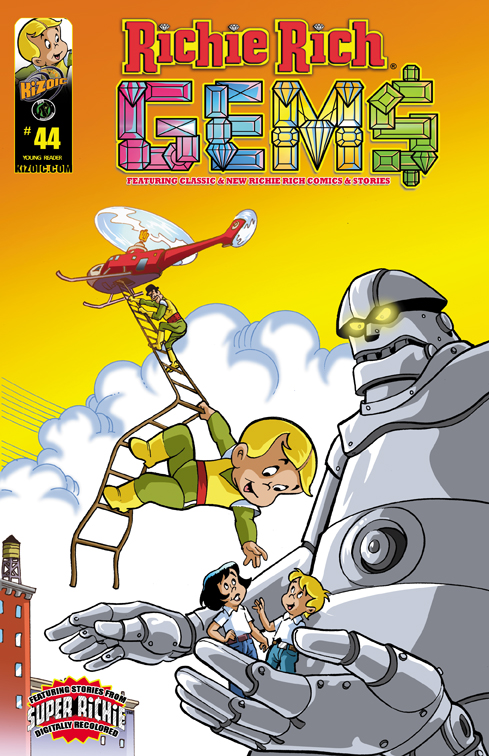 Richie Rich: Rich Rescue can be described as part James Bond and part Indiana Jones with Donald Trump’s bank account. In this series, Richie Rich is an altruistic adventurer who travels the world helping the less fortunate. Join Richie and the gang from Rich Rescue on exciting, all new adventures sure to excite an all new generation!  Richie Rich GEMS brings back to print the fun and adventures of Richie Rich the poor little rich boy, and features the classic stories of Richie Rich and his friends originally published by Harvey Comics.

It will be interesting to see how well this franchise will do again.  Another film reboot perhaps?

Check out Ape Comics for more.