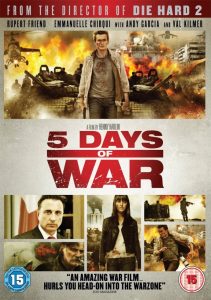 Director Renny Harlin is at it again, and this time his new film ‘5 Days of War’ looks really good.  Renny Harlin directed ‘Die Hard 2’ and ‘Cliffhanger’ to name a couple.  IMDB says: “A drama set centered around the war between Russia and Georgia, and focused on an American journalist, his cameraman, and a Georgian native who become caught in the crossfire.”  Enjoy the trailer below and tell us what you think.

OH EM GEE! What a great concept. A war overshadowed by the media’s coverage of the Olympics. A cover up by the US? Plus the guy that ate Val Kilmer is in this! Watching…