Mimi Leder To Direct Remake of ‘All Quiet on the Western Front’!!! 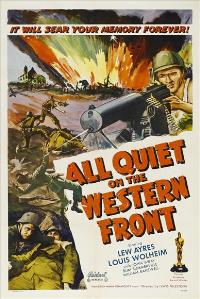 “Mimi Leder has signed on to direct All Quiet on the Western Front, an adaptation of Erich Maria Remarque’s WWI novel that was previously turned into the 1930 film that won a Best Picture Oscar and another for director Lewis Milestone.”   Mimi has mostly directed episodes of televison series but she has a few feature films under her belt.  Some of those include:  ‘Pay It Forward’, ‘Deep Impact’, and ‘Sentimental Journey’.

“Even though the original film was made in 1930 at the advent of the talkies, I was moved by its depiction of the terrible senseless brutality of war,” Leder said. “With this version, most of it takes place in the last 24 hours of the war. WWI fighting was brutal, hand-to-hand and ugly, and it practically wiped out a generation of young men. What is so compelling is the catastrophic levels of violence, this mind-numbing savagery, and what happens to a boy who in the journey to becoming a man has to become an animal. War destroys the humanity of this young man, stripping away his ability to feel, and making him act like a beast. Taken with the emotionality of how this young boy joined the war out of nationalism as many of our boys do to keep America safe, there is a message here about what happens to them and the politicians who are making war. It’s alarming how little this has changed. There is an opportunity to make a great film about war, but it is also an anti-war film, an un-romanticized version of war and its consequences.”

Production is slated to start production in late 2012 in Europe.  Now I am fine with this film being remade.  It is an amazing book and an outdated film.  I find it a very interesting choice in directors.  I really hope they can find the financing and tone for the film.  This could be amazing.