Stallone Has Hired Director Simon West To Helm ‘The Expendables 2’!!! 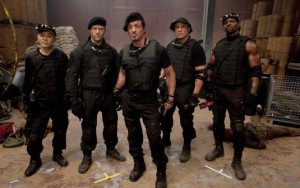 As we previously reported HERE, Stallone was looking for a director to replace himself for the sequel to ‘The Expendables’.  The first film, Stallone wrote,produced,directed,and starred in the film.  And it nearly killed him.  Plus it brought away from his acting.  By him not directing and handing it over to Simon West, he can focus on this character and how badass he is going  to be.

Simon West directed such ummmm, gems as ‘Con Air’, ‘Tomb Raider’, and ‘The Mechanic’.  So there’s that.  Production is expected to start this summer and everyone is expected to return with maybe some extras cameos to add.  Oh please JCVD and Stephen Segal come to ‘The Expendables’ sequel.  So while the first film was fun, I can only imagine the sequel will be amped up to 11.  Looking forward to see the craziness of this film.  I wonder if it will be serious than campy.