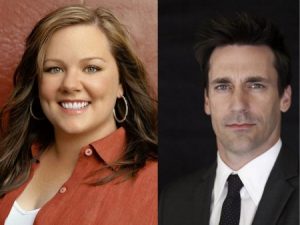 Bridesmaids stars Jon Hamm and Melissa McCarthy have been tapped on the shoulder to possibly star in a new comedy directed by Paul Feig (Bridesmaids/Freaks and Geeks) and produced by Judd Apatow.  There is not title yet for the project and the sotry has been kept under wraps for the time being but we do know that it is about a guy who becomes completely obsessed with a woman.

Anything from Apatow and Feig is comedic gold.  I have no doubt this will be hilarious.  I just hope the negotiations go well with Hamm and McCarthy.  Hamm is excellent in his dramatic role  in ‘Mad Men’.  But he also has his comedic side which he stars in 30 Rock and Children’s Hospital.  And Melissa McCarthy was so good as Sookie on Gilmore Girls, but her role in Bridesmaids was just off the chats awesome.

I think these two will make a good comedic duo.