Some Updates On That ‘300’ Spinoff Film About Xerxes!!! 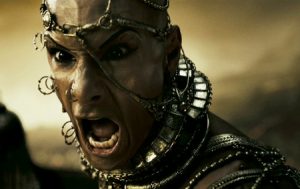 So you all remember that sequel or prequel to ‘300’ Warner has been wanting to do that was Xerxes centric.  So originally, Zack Snyder who directed ‘300’ and the most recent ‘Sucker Punch’ was going to direct this Xerxes film, but Warner and Christopher Nolan offered him the chance to reboot the Superman franchise.  He took that job instead.  So Warner has been hard at work trying to find a new director for the Xerxes project which is now titled ‘300: Battle of Artemisia’.

Warner is still using the script Snyder and his buddy Kurt Johnstad wrote and they have narrowed down their choice for director to two people.  Noam Murro and Jaume Collet-Serra are the two candidates.  Noam Murro hasn’t done much but he directed ‘Smart People’ and he will be directing the upcoming ‘Die Hard 5’ film.  Now Jaume Collet-Serra is more of a thriller horror director with titles as ‘House of Wax’, ‘Orphan’, and the recent ‘Unknown’ film.  Now while ‘House of Wax’ was god awful, ‘Orphan’ was actually really good.  And ‘Unknown’ tried to be good and it had its moments, but was ultimately a failure.  So these two somewhat new directors have a lot of people to make happy and big shoes to fill.  Snyder will produce this film too and I’m sure he will have a big helping hand in it.

“Like 300, it is based on a Frank Miller graphic novel that will be shot with the kind of stylized period green-screen action visuals that became the signature of 300 and helped the film gross $456 million worldwide. Xerxes was the Persian leader seen in 300. Miller’s graphic novel told the story of how Xerxes became this peculiar god-like entity. That mythology goes back to the death of his father, Darius, from injuries sustained at the Battle of Marathon in 490 B.C. Darius had told his son not to attack the Greeks because they can only be punished by a god, and so Xerxes tried to transform himself into a deity to gain revenge.”