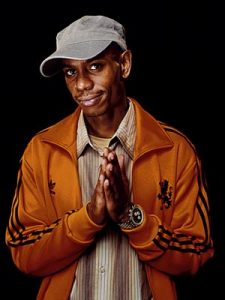 One of the funniest comedians of the last few years is planning a return to television with a new show.  There is no word on what the show will be called, or if the show will be sketch comedy or stand up, but there is definitely some development going on with Dave Chappelle and his comedy act.

Inside sources close to the Chappelle camp are saying that he is planning a new show for a subscription service and not cable network.  Subscription service meaning exclusive only to Netflix, Hulu, or Crackle.  These companies are now competing for original programming for their product.

The last huge news of Chappelle was when he walked away from a $50 million dollar contract for a season 3 of his hilarious Chappelle Show on Comedy Central.  He went to Africa and then came back and has been pretty low key.  He did an interview with Oprah and James Lipton from Inside the Actor’s Studio and talked about his decision.  Recently, he has been making several sudden appearances at comedy clubs performing all new material.  Testing the new stuff out.  So in the coming weeks, I bet we will get a press release discussing all things Chappelle and we will be sure to fill you in on everything.

Netflix has already optioned a new Kevin Spacey project called ‘House of Cards’.  This will be a $100 million dollar series directed by David Fincher and is set to star Kevin Spacey and will only be available thru Netflix.  And Sony’s Crackle has developed ‘Backwash’ starring John Hamm, Sarah Silverman, and Jeffrey Ross.  It will be cool and interesting to see what kind of new original programming will come out of these types of media.