Sparky Shagwell Dives Into ‘Pretty Little Liars’ And Survives To Tell Us About It!!!

We have a new weekly column here at Boomstick with our newest writer.  Sparky Shagwell is her name and she is the tortured step daughter of the Queen of England.  She spends most of her time watching re-runs of ‘Perfect Strangers’, eating chili with crumbled Oreos mixed in, and plotting her takeover of the Royal Family.  But in her spare time she loves the ABC Family hit series ‘Pretty Little Liars’.  She will be giving her expert opinion and review for each episode over the coming weeks.  Please give Sparky Shagwell a warm welcome and enjoy her hilarious coverage of ‘Pretty Little Liars’.  Enjoy.  We are happy to have her on board.

Ok loyal readers. When last we met, a whole lotta shit was going down in the church. No need to worry, it’s the wholesome “my-sister’s-husband-my-ex-fling-is-trying-to-kill-me” kinda shit.

So Ian tried to kill Spencer by tossing her off the bell tower but he underestimated her scrappy nature and she grabbed him before she fell. Struggle, struggle, struggle and then the hooded wonder (presumably that B, “A”) walks by and pushes Ian down like I would knock over a skank in 6-inch heels at a Black Keys concert – true story. The girls have rushed to Spencer’s side just in time to walk outside amongst the glares and rabbles  of the townsfolk casting their hypocritical glares and opening their pie holes voicing opinions on matters they know not of which they speak. At that moment the cops pull them aside and scare the crap out of the girls by saying IAN IS NOT THERE!  – Aaaaaaaand – roll credits. Super extra kudos for using Secret by The Pierces for the theme.

Here are the facts:

Garrett drives the girls to the police station only to park in an alley and tell them to get out. Hannah, ever so on guard says NO. They relent and he tells them it is not safe to talk in the car. He reiterates that he can get in trouble for lying so can they and he conveniently mentions he has the $10k hidden. He asks about the videos and Emily (with her first pinch-faced look of the night) nods yes. Later, Garrett and Jenna are parked at a house and A’s brother, Jason, is apparently inside snooping for… something, we never find out.

So, the 4Gs (4 girls) a.k.a. those girls who blinded Jenna, wake up the next morning tired from the questions, the glares and, oh yeah, the attempted murder. While doing the “caffeine junkie” bit, they all refuse to drink Spencer’s blend of super-hyper-ADD coffee and then head downstairs only to find a parental collective refusing to believe their daughters. Adding insult to injury, the girls now have to see a grief counselor as…a…group? Hmm… I like that.  Broody Toby shows up and is refused access to Spencer because he is a rebel with a reputation and he will never, ever be any good. Sadly, he is shunned from the party.

At school the next day, Noel returns, Hannah is gossiped over while Mona shoos away the hags and then comments on using breast milk as a weight-loss product (ewww). Ezra & Aria have their “are we over” drama pause – the answer is “I don’t know”. Spencer is now shunned from Toby’s family for the same reasons – bad rep and all. Now comes the creepy, Emily (pinch-face girl) is voluntarily watching the ‘Sexual Harassment of Toby Cavanaugh by the blind freak Jenna Marshall’ when a stranger appears in her mirror. A skulky realtor is doing a walk-through and catches Emily being creepy. If only he knew what she was viewing. Wait, the plot thickens, maybe he does. DUN DUN DUN

The girls go to Anne Sullivan (see, there is life after Helen Keller) and sit….and wait… and stare awkwardly. Finally, Hannah shows up after an afternoon of retail therapy hoping to miss the hug fest. Beep, time’s up. Once they leave the therapist’s office, they see Toby and Jenna; notice the newspaper headline “WHAT REALLY HAPPENED” and are shocked at the notion that they are part of a plot to help Ian run away with $10k. I love the media!

Hannah gets home to see her mom (Ashley) seemingly alone at the table with some white wine. As she gets closer, the camera pans (so dramatic) to reveal Caleb is sitting in the kitchen.  Ashley leaves to try on her new shoes, Hannah bribes her mom with Steve Maddens, so the lovebirds can have some privacy. Caleb reveals he did not leave without saying good-bye and in fact, he left Hannah’s love letter with Mona, Frenemy Extraordinaire.  Once again, he confesses his love and leaves.

Melissa approaches Spencer after an emotional confrontation earlier ending in her yelling, “I don’t want you anywhere near this baby!” (a very Joan Crawford style rant)  to offer her an apology and give up the juicy tidbit that the baby’s name is going to be Taylor. Hmm, beware of enemies bringing gifts and smiles. This little interaction has caused Spencer to miss the chance to see Toby who is waiting at Emily’s.  They talk, he commits an act of vandalism – all is well.

Aria goes to Ezra’s place, where conveniently he is walking around half-naked. Thanks for the eye candy. The ex-fiancé talk comes up and Aria is starting to have doubts, but they are quickly squashed with the flash of a grin and a twinkle in his eye. She leaves the apartment only to get a text from Queen B ‘A’ that is a pic of Ezra’s desk with the caption, “What’s Missing?” Smart Aria looks under the doormat and notices the key is gone. Sidebar – why the hell is there a doormat at the door of an inside corridor apartment?

The next scene is a blur because all I remember is Emily making her pinched face with pouty duck lips…  ugh. GET A NEW REACTION. You are as distracting as Christian Bale’s Batman voice. 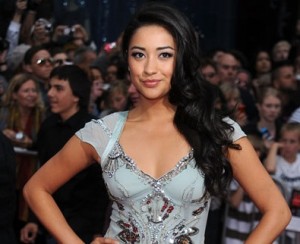 They go to the shrink and come as close to a gnat’s pubic hair to telling Anne all about the last year’s events as well as showing the videos. I hope they made a back-up, as history shows these girls lose stuff a lot. Spencer, whose power of observation spies Ezra’s Master Degree on the shelf behind the therapist and thus causes the gal’s the clam up. Being a professional, this very subtle gesture causes the shrink to go, “hmmm” and inform the parents she recommends that the girls no longer be allowed to hang out together. OMGee Wiz, I can’t see my friends. Just kill me now.

Anne the shrink is leaving her office and feeling a little like Rockwell when he wrote the song “ I always feel like somebody’s watching me” as she hears footsteps behind her. No one is there, surprise!  She unlocks her car and hurriedly speeds away. From the alley you can see the hooded wonder shrouded in darkness, all angsty and mysterious like.  I am beginning to think shim is up to no good. Speaking of shim, I still love Lucas.

Toby sneaks in to Spencer’s and scares her enough to grab a knife and hide, on the floor? They embrace and all is good for 5 minutes. After he leaves, Spencer hears a text jingle coming from inside….the SOFA! It is Melissa’s phone with an ominous text supposedly from Ian. This makes the rebel contact the 3Gs and discuss such craziness. They return the text and ask him “What is our baby’s name?” the reply, met with a collective gasp, is “Taylor”.

WTF? I am so much more confused. Are there no secrets in Rosewood? Did they ever think to turn off their cell phones? Or tell their parents. Is any punishment worse than what they are doing to themselves?

We are left with a juicy and not at all suspicious scene shot of a person viewing Emily’s house in all black with black gloves erasing her hard drive.  At that moment the skulky realtor pops in to answer questions. I would fire this guy, as he sucks in the department of protecting your client’s privacy. Seriously, who looks at houses in full burglar gear without raising eyebrows?

I really wanted to see what Steve Madden shoes Hannah bought. I have a girl hard-on for him!

See You Next Tuesday!

Get the first season below.

One thought on “Sparky Shagwell Dives Into ‘Pretty Little Liars’ And Survives To Tell Us About It!!!”