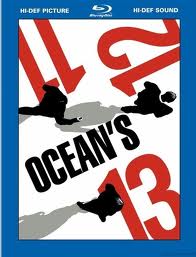 Here is a Geek Deal for an entire week or until Sunday.  The Ocean trilogy on blu-ray is selling this week for only $17.99.  That is a little more than $5.00 a blu-ray disc.  All three films for 50% off in a set.  I love these films.  The actors have such a great chemistry and were always such a joy to watch them all share the screen.

Oceans 11 (2001) Danny Ocean (George Clooney) likes taking chances. All he asks is that his handpicked squad of 10 grifters and cons play the game like they have nothing to lose. If all goes right, the payoff will be a fat $150 million.

Oceans 12 (2004) They’re back. And then some. Twelve is the new eleven when Danny Ocean and pals return in a sequel to the cool caper that saw them pull off a $160 million heist. But $160 million doesn’t go as far as it used to. It’s time to pull off another stunner of a plan. Exciting locations include Amsterdam, Paris and Rome, the direction again of Steven Soderbergh and the original cast plus Catherine Zeta Jones and others.

Oceans 13 (2007) Danny Ocean rounds up the boys for the most dazzling heist yet, after casino owner Willy Bank (Al Pacino) double-crosses one of the eleven, Reuben Tishkoff (Elliott Gould). George Clooney, Brad Pitt, Matt Damon and more re-team with director Steven Soderbergh for a split-second caper that stacks the deck with wit, style and cool.

Extras include:
Behind the Story
Audio Commentary with Matt Damon, Andy Garcia, and Brad Pitt.
Audio Commentary with Director Steven Soderbergh and Screenwriter Ted Griffin
HBO First Look: The Making of Oceans Eleven. Become part of the team as you enter the world of Oceans Eleven and see how the film became a reality
The Look of the Con: Director Steven Soderbergh, Costume Designer Jeffrey Kurland and others share their flair for styleon what it takes to stay incognito for the perfect con
Theatrical Trailer
Teaser Trailer #1
Teaser Trailer #2

Stock up for the holidays, birthdays, or for yourself.  Remember the sale ends at Sunday.