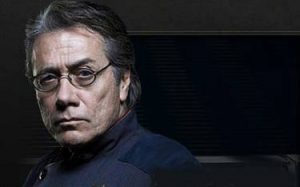 Edward James Olmos who is popularly known for the Captain turned Admiral Adama in Sy-Fy’s epic series, ‘Battle Star Galactica’ has just joined the ever growing cast of the hit Showtime show, ‘Dexter’.  Olmos joins guest stars, Mos Def and Colin Hanks in the sixth season which starts in the Fall.

Olmos will be playing a charming professor of Religious Studies in a huge story arc in the sixth season.  It’s going to be strange seeing Olmos going from ‘BSG’ to his role in ‘Dexter’.  I just want him to say “So Say We All”.  I think whoever is in charge of casting for ‘Dexter’ needs to get some kind of award.  All these excellent actors from this upcoming season and past season have really made the show a lot of fun to watch.  I think Edward’s presence will attract tons of new viewership to ‘Dexter’.