When Terminator Met The Fast And Furious!!! 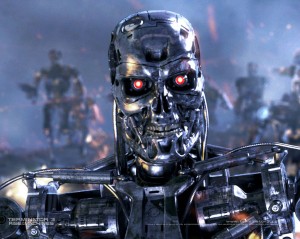 Yeah the title says it all.  Over at Deadline, there is a report that Universal is looking to purchase some rights to “The Terminator”.  They want to do this for director Justin Lin.

Justin Lin has directed the last three Fast and Furious films including the upcoming one, “Fast Five” which I have heard is actually pretty decent.  But for me, I have never enjoyed any of the Fast and Furious films.  EVER.    But I will say that Lin’s early work of “Better Luck Tomorrow” and “Annopolis” were really good.  So  I know he is talented.  And maybe with a good script and some excellent action choreography, he will be able to take on the Terminator.

But, Terminator I feel has died.  A long and slow death.  There has not been a decent Terminator film since part 2.  The last two films were pretty terrible.  I think Terminator is done.  They even tried a television series.  It didn’t really work out either.  I really do not know if there could be a repair on this franchise.  Now I definitely do NOT want a reboot, but if you want to revive this dead franchise, get Tarantino, Speilberg, and Gareth Edwards to make this film.  Add to that Robert Rodriguez.

But this is all hypothetical.  A lot needs to happen for any of this to come true.  And no word on if arnold will make an appearance or not.

I really have no hope for another good Terminator film, but that’s not to say someone will surprise me.