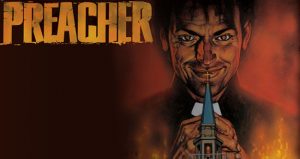 It seems like going on about ten years now, that the BEST COMIC BOOK EVER, has been tried and tried again to become a feature film or television series.  Nothing ever has come of it.  It seems that director D.J. Caruso (Disturbia, Eagle Eye, Taking Lives, The Shield) will direct the long awaited “Preacher” adaptation.  This depends on how well his upcoming film “I am Number Four” does at the box office according to SlashFilm.

If you haven’t read PREACHER, GO HERE AND PURCHASE THE BOOKS.  But it basically about:

“At first glance, the Reverend Jesse Custer doesn’t look like anyone special-just another small-town minister slowly losing his flock and his faith. But he’s about to come face-to-face with proof that God does indeed exist. Merging with a bizarre spiritual force called Genesis, Jesse now possesses the power of “the Word,” an ability to make people do whatever he utters. He begins a violent and riotous journey across the country in search of answers from the elusive deity.”

Now this film or series of films will only work if they go all out for it.  All or nothing.  That’s it.  That’s how it will work.  This book will most likely offend tons of people.  If it doesn’t, then it is not getting the job done. 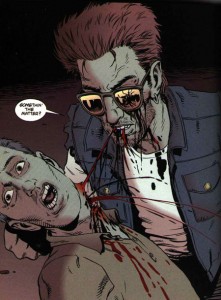 This book is brutal, ultra violent in all natures, graphic sex, and tons of edgy topics are a’ plenty in this book series.

Time will tell, especially when “I AM NUMBER FOUR” comes out and if it does well at the box office.  It’s good to see a director, any director really, risk his career for a film about a book so brilliant, that he/she might not have a career anymore or gets tons and tons of threats and for such a controversial film.

Caruso wouldn’t be my first choice as director, but I did love Disturbia.