Twelfth_Angry_Man Takes a Stroll With Zombies & Weighs In on the First Season of Walking Dead!! 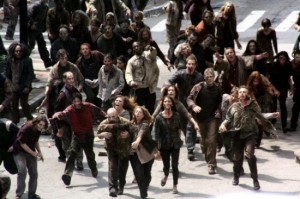 Hi folks.  Boomstick Comics has a new writer who will be contributing reviews, news and all sorts of AWESOME to the site.  I have known him for the better part of almost fifteen years now and I can say is when he is not eating carrot cake covered with Lucky Charms, he enjoys all types of films and music, and enjoys a good lightsaber battle.  He will be known as the Twelfth_Angry_Man. So give him a warm welcome and enjoy his review/recap of FAILS & WINS from this 1st season of AMC’s Walking Dead.

This is the proverbial popping of my authorial cherry here on Boomstick, so go easy on me.

After smashing basic cable records in both the series premiere and season finale, the buzz of AMC’s The Walking Dead cannot be ignored.

Adapted from an Image comic series of the same name, let’s take a quick look at what worked and what didn’t in the mere 6 episodes that counted as season 1 of The Walking Dead.

(Note: Spoilers abound from here on out, this is intended for those that have watched the first season already.)

WIN: The entire pilot episode. It largely matched what the original comic set up nicely, and was easily the best episode of the series so far. Its

quality was likely helpful in bringing skeptical viewers back for further episodes.

FAIL: Nearly everything about the Shane character. From the way he lays claim to Lori to the iron fist he enjoys over the small collection of

FAIL: Lori herself is quite simply boring and difficult to imagine why she’s even worth fighting for between Rick and Shane, despite their

complete unawareness that they’re competing for her at all to begin with.

WIN: The undead themselves. The make-up and trademark zombie movements were about as well-done as you could expect for a TV series.

WIN: The music overall. Frequently haunting, yet poignant when it needed to be.

FAIL: The overdone sound effects. This largely brings up a larger issue, in that it appears the direction of the entire series seems to be

somewhat scattered in terms of how purposely campy it does or doesn’t want to be. The sounds of pickaxes through zombie skulls wasn’t

chilling, it was laughable. The audience just isn’t quite sure if it’s in on the joke yet or not.

WIN: The dialog between characters. No, the dialog overall in the series is not fantastic. But it’s a vast improvement over what the comic

offered, which frequently dipped into an awkward mode in which each character would launch into a lengthy diatribe to make some broader

point, rather than actually speak with the character sharing a comic panel just two inches away.

FAIL: The season finale for the most part. The CDC ended up being mostly a massive waste of time. It served the purpose of seeing the

survivors’ demeanors change with a glimmer of hope of returning to somewhat routine daily life, then ripping it away just as quickly as it came

about. A series such as The Walking Dead does not need one-off type material like this, at least not when your season is only 6 episodes long

and it’s in the last episode of the season.

FAIL: Treading dangerously closely to drawing too many comparisons to Lost. Lost was largely viewed as a successful niche show that

no need for this series to be on the air for 6 seasons the way Lost was. We simply do not have enough interesting content in this postapocalyptic

zombie-filled world to putter along at the brutally slow pace Lost popularized.

WIN: The AMC network itself. The success of The Walking Dead is a massive boost for a channel like AMC. Despite the cancellation of their

series Rubicon, Mad Men and Breaking Bad have been tremendous break-out critical darlings that have brought a wealth of credibility to AMC.

While The Walking Dead likely won’t be the type of show to bring home a slew of major television awards, it will however bring plenty of

eyeballs to their channel’s content. As a DirecTV subscriber, one can only hope this convinces them to carry the channel in HD properly. 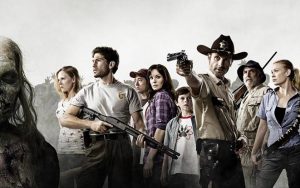 Nevertheless, it’s a long time until season 2 resumes in late 2011. Sounds like many of us intend to come back for it.

You can call me the Twelfth_Angry_Man!!