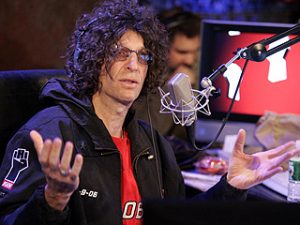 Today marked the first of five more days left of the Howard Stern Show on Sirius Radio.  It is hard to believe it has been five years since Howard and his crew made the move from terrestrial radio to Sirius.  It has been an excellent ride with tons of laughs, cries, and tons of jokes and some of the best interviews ever given.  Over the past few months, Howard has been contemplating on what his next movie will be.  It was speculated by tons of media outlets and various crew members as if he would retire, or go internet only radio, stay with Sirius, or move to another pay radio, or even back to terrestrial radio.  Everything over the past few months has been very cryptic with answers given by Howard as, “I don’t know what I am doing.  There are a lot of options right now.”  So we have all been on the edge of our seats.  And for good reason.

Reason being, that this is best radio talent in the business and the best programming on the planet.  If you don’t believe me, just research subscriptions and ratings yourself.  He went from 600,000 listeners five years ago to over 20 million listeners.  Howard is a master interviewer and does not beat around the bush.  He asks the questions people want to hear and he gets the true answers that everybody wants to know.

Mix in there an outrageous staff that never lets up the jokes and drama, and all of the whacky contests, and news stories, and you have the PERFECT Program for any time of the day.  Howard knows this business and knows what people want to listen too.

And it is only fitting that he would be signing on for another five years on Sirius Radio.  Not only that, but Howard will be broadcast through out the web and on mobile devices now so that you can listen to Howard Stern and the gang virtually anywhere now.  The app should be available very shortly to download.

Now as for everyone else, they will have to make their own deals, which will most likely happen, because the show really works with everybody.  Howard commented he wanted everybody to stay except for Benjy.  Hilarious.

No word yet on new video or tv ventures, but let us all hope, Howard gets a channel or at least will have an on demand service with everyone, and not only with the shitty service that is Time Warner Cable.  Maybe their will be video for streaming or download on their new venture into the applications.  That would be amazing.  Also it seems like he will be on at the same time as he is now, with maybe room for different times in the future.

But this all excellent news and I am more than thrilled that I get more Howard Stern in my life for the next five years.