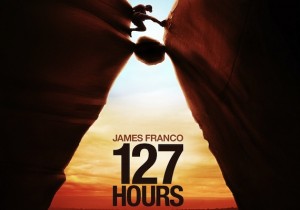 This film is perfect on an emotional and a sensory level.  You literally go through every emotion and sense through out a 90 minute film and come out on the other side feeling complete exhilaration.  If you can handle watching a guy cut off his own arm in order to survive death, then you are going to LOVE this movie.

There is not one minute wasted on Danny Boyle’s triumphant film, “127 Hours”.   Boyle got James Franco do give his best ever performance as real life adventurer and mountain climber, Aron Ralston who accidentally gets pinned under a rock in a cave well out of reach of any potential rescue.

You really are trapped in the crevice with James the entire film and you get the glimpse of what he went through and what his thoughts were that kept him alive.  Danny Boyle captures this flawlessly.  If this were to happen to anyone, then Aron was the right person, because he know just what to do if this kind of accident were to happen.  He knew how to conserve water, he knew how to pass the time, he knew how to create a system of straps that would allow him to sleep, and ultimately the guts and fortitude to what needed to be done in order to survive and escape from certain death.  Boyle also concentrates on the mental breakdown of Aron when he runs out of water and shows us the real hallucinations that Aron did have  when he was actually pinned down there.  Again it is done flawlessly.

The real Ralston had a digital camera with him that he used to document his time down in the crevice trapped.  He showed how he rigged the straps, how he conserved water, and made water.  He also did video letters to his parents and sister and friends, as well as talk about the climate and animals he’s seen while being trapped.

Now I have seen quite about everything James Franco has done acting wise, and this by far the best I have ever seen.  It is amazing to see what lengths Franco went to play this role.  It is simply THE BEST.

Danny Boyle also created in this film the ability to actual pretty much capture the chaos into something we can taste, smell, and most certainly hear.  The scene most represented by this is the well known by now scene in which Ralston cuts off his arm in order to be freed.  Now it is not as bloody or gory as you might expect it to be, but it is definitely  hard to watch.  For example, when Ralston hits an exposed nerve deep down into his arm and experiences REAL PAIN, you will feel it yourself in your theater seat.  At that exact moment, Boyle punctuates that pain with extreme loud guitar feedback, which of course is pain and makes the ears rings for quite a while.  And I am not talking about what Aron had to do to his arm and elbow even before he could start cutting it.

This movie is made to shake you up to your core.  Not because of the gore, but it is the whole experience.  Franco and Boyle have given us their best work to date with this film.   This is definitely one of the top releases of the year.

This film is absolutely AMAZING and highly recommended.

And on a side note…the rumors are three billion percent true.  You have heard of screenings of this film where pretty much at every viewing someone has fainted or vomited during the watching of this movie.  Well my experience watching this film was no different.  During the arm cutting scene a 12 or 13 year old kid passed straight out on the stairs of the theater.  His dad was trying to take his kid out of the film during the scene and once the kid hit the last step, he fell to the floor hard.  It was hardcore.