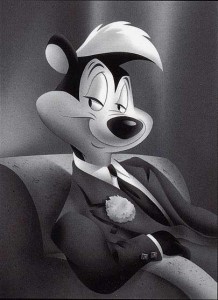 The famous Looney Toon skunk is finally getting the recognition he deserves.  He is getting his own movie.

Warner Brothers is developing a film based on Pepé where he and the girl of his dreams, Penelope Pussycat, would be CG characters and everyone else would be real.

Mike Meyers will lend his voice as Pepe Le Pew.  No word yet on who will be Penelope Pussycat or who else will star in the film, but with a big name like Mike Myers, you can be sure that the stars will come rolling in.

It has been quite a while since the Looney Toons have been on the big screen.  I think the last time they were on it, was Looney Toons: Back in Action.  Which wasn’t that great of a movie.

It is an odd choice to revamp the Looney  Toons with this character rather than Bugs or Daffy, but if this movie does well, let’s hope we can look forward to an entire Looney Toon series of films.