Die Hard 5 Is On The Way 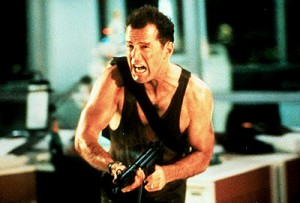 A script has been written already and some changes are being made and some knots are being loosened, but yes, another Die Hard film will be in the works.  Maybe as soon as 2011 if everything goes to plan.

Now I love the first three Die Hard films.  The character “John McClane” is such an amazing character, that I wish he had his own TV series on HBO.  At least he has his own comic now.  Available HERE.

The 4th Die Hard film, “Live free or Die Hard” did not have the guts to be what it should have.  Instead we got a half-assed attempt at a cool movie with Kevin Smith.

The proper way to do a 5th Die Hard movie would have a really tight script.  Have the amazing action sequences and drama.  Add to that some really funny dialogue so we can get a bit of the humor in there.  Then get a director/producer team who know what they are doing.  Maybe a Tarantino produced film directed by Guy Ritchie, or perhaps directed by Doug Liman.