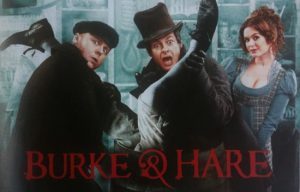 I have always been a fan of John Landis. He has quite an impressive resume. He has directed such films as: “Animal House”, “Coming To America”, “An American Werewolf in London”, “Michael Jackson’s Thriller”, “Three Amigos”, and “Trading Places” to just name a few.

He is returning to direct a film called “Burke & Hare” which is based on the real life exploits of Irish murderers William Burke and William Hare who killed about 17 people in Edinburgh in the span of 1 year in the 1800’s.

The film’s main stars will be played by Simon Pegg (Shaun of the Dead) and Andy Serkis (known for playing King Kong and Gollum) as both Williams. They also have one hell of a supporting cast which is: Tim Curry, Isla Fisher, Jessica Hynes, and Tom Wilkinson.