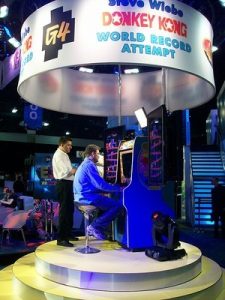 Steve Wiebe, the school teacher gamer, most popular from the EXCELLENT documentary “King of Kong: A Fistful of Quarters” has reclaimed the throne as the #! high score on Donkey Kong.

The official gaming scorekeeping organization known as “Twin Galaxies” just posted Wiebe’s score of  1,064,500 which has knocked asshole Billy Mitchell to the #2 spot.  Wiebe was last #1 in 2007 when he was beaten by Billy Mitchell.

Wiebe said this in an interview:

“Hank Chien is a great person and DK player, so I also feel that he’s capable of taking the title at anytime,” said Wiebe. “I think when I came up short of the record at several live events, many people thought that I just didn’t have it in me anymore. Getting the record back definitely feels good.”

“Being a school teacher, I had been going after the record all summer, which is about a two month period of being off from school,” stated Wiebe. “Basically, I played a game a day and believed it would happen sooner or later. Right around the Fourth of July, I got an inner ear viral infection that caused some vertigo, which is still affecting me a little today. I’m glad I was able to play through it. The day I got the record was essentially the last day of my summer break before returning to school, so it was down to the wire. I remember restarting over about five or six times and then getting a great start that finally led to the record.”

“Mark Kiehl is an amazing DK Junior player,” Wiebe said. “I was able to talk to him a little bit in Iowa, and he’s a great person as well. He’s certainly pushing the score pretty high, so getting the DK Junior record will take some great play if I’m to get it. I eventually plan to get back to playing Junior, but I’m not sure when that will be yet.”

“I’m not surprised at all that the DK title has frequently changed hands of late,” Wiebe continued. “I knew Billy would resurface and I’ve never let go of trying to recapture the record myself. There are a lot more DK kill screen players out there now, so the competition is getting pretty tough. I fully expect the title to keep changing hands until someone knocks it out of the park.”

“I definitley see Billy coming back and I would be very surprised if he didn’t. I don’t know where or when Billy will return, but I’m counting on it.”

Much Much congratulations to Steve Wiebe and his family.

It is one of the best documentaries I have ever seen.  Click below to purchase it.