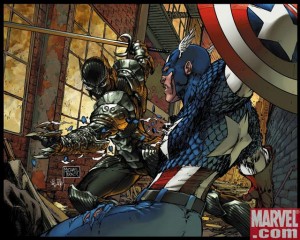 Since the first Iron Man film, Jon Favreau and Marvel have gone to great lengths to show us glimpses of some of our favorite superheroes in subtle ways throughout the Marvel hero films.

Now when we all pick up our copy of Iron Man 2 on bluray/dvd, take a close look and see if you see the references to Captain America, Thor, and Black Panther.

Specifically the scene featuring Tony Stark and Nick Fury discussing the Avengers Initiative, the background of which was littered with an assortment of footage, maps and images hinting at other Marvel properties.

[The first is] from “The Incredible Hulk”, which means Iron Man 2 took place before “The Incredible Hulk.” If you look you see the the crater on the other monitor, that’s the “Thor” thing. That’s where the hammer was recovered. This is just a geek heaven here.

And if you think that anything on this monitors is not something we at Marvel didn’t talk about for hours – you are crazy! See, there is a map up there, so… if you look at those maps, each one of those locations corresponds to something in the Marvel Universe. I’m not supposed to say that.

Pre-order the Iron Man 2 dvd/bluray below for a great discount.