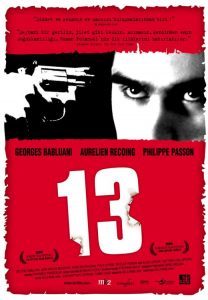 Well the forces that be have decided to make yet another re-make.  This time  13 Tzameti.  Now I know most of you have not heard of this film let alone seen it.  Let me tell you.

When I first watched this movie, I really did not know anything about it, other than it was a French Film and it was going to have violence of some sort in it.  That’s all I knew going into it.

Well, about half way into the movie I realized I was not sitting in my chair anymore and that I felt wet.  Yes I literally was sitting on the edge of my seat and sweating.  That’s how nerve destroying this movie is.  I don’t think I have ever done that in  a movie before besides Hard Candy.  This is one of the most suspenseful movies I have ever witnessed.  Yes it made me sweat.  Get the original film HERE.

It basically is a story of a young man who assumes the identity of a dead man.  A dead man who was involved in some weird scary shit.  Scary stuff like the underground world of power, violence and a russian roulette competition where if you lose, well, you will lose all.  What a fantastic movie.

So along with this never ending trend to remake every movie EVER, this film is being remade.

Gela Babluani (original writer/director) has returned to helm this project.  He has attached Jason Statham, Mickey Rourke, Ray Liotta, Ray Winstone, and 50 Cent to star in this new movie.  I wonder if this is the film that 50 Cent lost all his weight for.