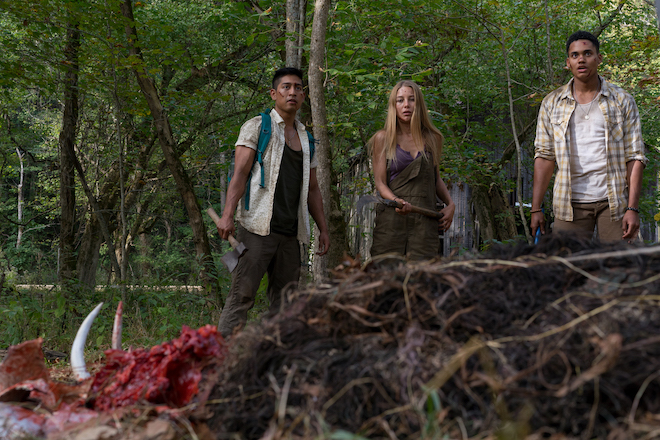 “Wrong Turn is a successful reboot of a perfect horror movie premise.”

Wrong Turn is the 7th installment of the Wrong Turn series that started back in 2003 but this serves as a reboot of sorts as one doesn’t need to be familiar with the previous movies in any way to enjoy this outing. Returning to its roots as a “road trip gone wrong” this reboot of the series offers some new twists on the scares you’d expect to find from the genre. While it still tends to follow the same basic structure of every Wrong Turn movie that came before it, the script offers some moments that subvert audience expectations in a way that makes this the most enjoyable Wrong Turn movie since the original.

A group of close friends who are all professionals decide to go on a road trip to hike the Appalachian Trail. The group of friends is quite the rainbow coalition of representation. There is an interracial couple, a gay couple, and a straight couple which allows for some adjusted dynamics of a group who is about to find themselves in one hell of a place. After being warned by almost everyone in the small town they stay in the night before their hike to stay on the trail, these poor listeners head off the trail and find themselves at odds with The Foundation which is a society of people living on the mountain. As our group deals with The Foundation, the movie also follows the father of Jen as he tries to piece together where his daughter went missing and rescue her from anything she is caught up in. The narratives meet up in the climax for a rather entertaining finish that even someone who has seen these kinds of movies countless times will find refreshing and fun.

Wrong Turn is a delivery system for good scares, intense situations, and some top-notch gore. It delivers these elements in a very satisfying fashion. If a viewer is expecting deep dialogue or a bullet-proof plot then they will be disappointed but any viewer who loves horror movies will get exactly what they expect and more from this movie. The really fun aspect of this installment is the introduction of The Foundation which strays from the inbred backwoods weirdos of the first several Wrong Turn movies and gives us an educated society that our main characters must deal with. Don’t be fooled by that description into thinking that The Foundation doesn’t offer its own brand of terror though, in some ways The Foundation’s methods are far more disturbing and scary. 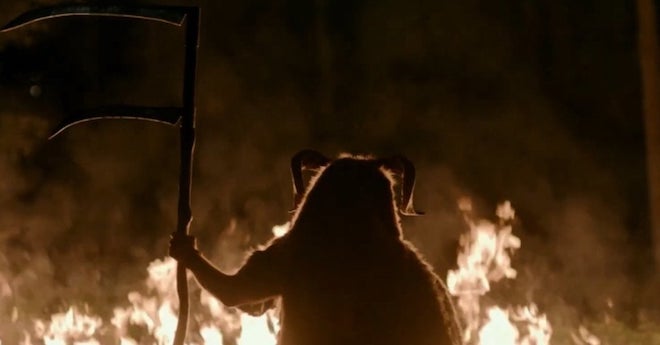 What is a welcomed surprise is that The Foundation at its core isn’t *really* bad people, they just want to be left alone on the mountain and so from that perspective, there is a slightly terrifying aspect to a viewer understanding the villain’s viewpoint which definitely is missing when the villain is usually an inbred monster from the woods. It would have been nice to see a little bit more of how The Foundation’s society works because the glimpses the movie gives us are very interesting and ripe with possibilities to explore.

In the end, Wrong Turn is a successful reboot of a perfect horror movie premise. It offers enough gore and scares to satisfy any horror fan while expanding the possibilities of the villains for future sequels. Even the climax of the movie will challenge the audience’s expectations as it rolls through its final few twists and turns to end with a fantastic closing credits scene. Whatever one’s expectations of another Wrong Turn movie are, they can be sure that this reboot will be the perfect amount of genre entertainment on a Friday night.