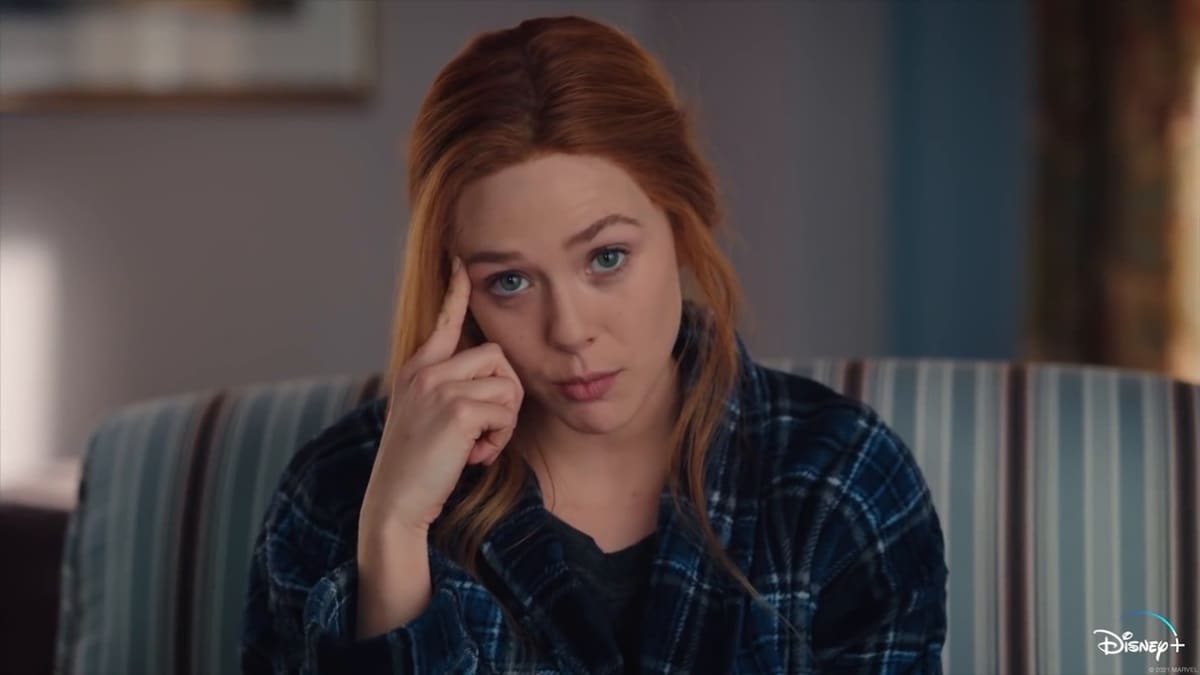 WandaVision’s 7th episode was perfectly titled “Breaking The Fourth Wall” as it mirrored the structure of Modern Family or The Office for the first half before turning into the first 10 minutes of an MCU movie. Viewers of WandaVision are either with the story structure or against it, no one is on the fence anymore. This show is taking its time with a very strange, Easter egg-filled, narrative and we are heading towards quite an exciting final two episodes. The 7th episode was not a “filler” episode but it did feel like the final table setting before we flip the table over and smash all the expensive dishes.

The episode opens the morning after the events of Halloween where Wanda expanded the Hex in order to recapture Vision as he had disintegrated after leaving the Hex last episode. Wanda is doing her best Julie Bowen from Modern Family impression and just trying to have a full day to herself to regroup. Billy and Tommy come upstairs to complain that their game is freaking out and it is! The controllers the twins are using keep changing from Atari to Nintendo to Uno cards. As Wanda comes down to eat breakfast she notices furniture and her milk changing timelines which she tries to play off but when speaking to the camera mentions she is confused by what is happening. As the twins ask about Pietro’s mention that their Dad had died twice, Wanda says that they don’t have to listen to “that man” and their Dad will come home when he is ready. Does this mean Wanda knows Pietro is fake? Is Pietro fake? We don’t find out in this episode but referring to him as that man was quite a tease. Just as the twins start to ask more questions Agnes shows up and offers to take the twins for the day so that Wanda can be alone. Wanda takes her up on the offer and tries to relax.

Outside the Hex, Monica and Agent Woo meet up with SWORD members loyal to Monica’s mother and they have brought a vehicle capable of crossing through the Hex. Monica straps in and heads towards the boundary of the Hex but the vehicle can’t handle the energy and Monica has to escape as the truck is changed and spit out. Monica decides to make a run for it and powers through the Hex on her own. This appears to change her and when she appears on the other side of the Hex she has glowing blue eyes and can see the World in an ultraviolet manner. This isn’t explained and her eyes turn back to normal as she rushes to Wanda’s house.  The bad counterpart of SWORD seems to be preparing for an assault on the Hex and announces that they launch today.

Vision wakes up and uses his power to awaken Darcy who was captured inside of the Hex when Wanda expanded it. As Darcy and Vision travel back to Wanda’s house, Darcy tells Vision his entire story from Age of Ultron through how he died in Infinity War, twice. In a direct-to-camera conversation a’la The Office, Vision admits he had no idea Wanda has been through so much. Darcy also reveals that SWORD was tracking Vision in the Hex because they wanted to use him as a weapon. After getting stuck in “traffic” Wanda has created to delay Vision’s return he remembers he can just use his powers and fly there and he takes off.

Meanwhile, Agnes is watching TV with the twins in her house when Billy mentions he can’t hear anything inside her and that she is quiet. This was pretty on the nose way to reveal Agnes is a problem but it worked because the last episode established that Billy can hear people’s voices and pain. Just then next door Monica arrives at Wanda’s house and Wanda comes out to defend herself. Monica and she have a conversation where it is established that Wanda isn’t a villain and doesn’t want to hurt people. Just as Monica is making progress, Agnes rushes out and gets Wanda riled up again. Wanda blasts Monica but Monica takes the blast, glows light blue, and lands in a superhero pose. Agnes then ushers Wanda inside her house.

As Agnes makes Wanda a drink she realizes she doesn’t hear the twins even though she sees sandwiches and the TV on a kid’s program. When she asks Agnes where the kids are she is told they are playing in the basement. The episode gets very creepy here as Wanda walks down the basement and finds vines on the wall and what appears to be an ancient ritual area with a glowing book. As Wanda looks around for the twins, Agnes appears and reveals she is really Agatha Harkness and her eyes glow purple. We then get a hilarious song intro for Agatha Harkness that explains she has been behind everything in the Hex, tricking Wanda, even controlling Pietro. As the song ends she reveals she killed Wanda’s dog and laughs maniacally as her purple energy seems to put Wanda into a trance. A mid-credits sequence shows Pietro appear to attack Monica as she looks in Agatha’s window.

With only two episodes left we are on a collision course and are starting to learn who is real and who isn’t. It appears that Pietro is real but is mind-controlled by Agatha. Both the twins are definitely real and possess real powers. Finally, somehow Wanda has resurrected Vision by reconstructing his body and using her powers which came from the Mind Stone which powered Vision to revive him inside the Hex. One can only assume that Monica, Vision, and the twins will save Wanda next episode to set up a final showdown with Agatha. Of course, whatever insane plan SWORD has to capture Vision can’t be far behind. One can’t presume where Pietro will fit in the final battle but the scene from the trailer where Vision says to Wanda, “This is our home, Let’s fight for it.” has to be coming up.