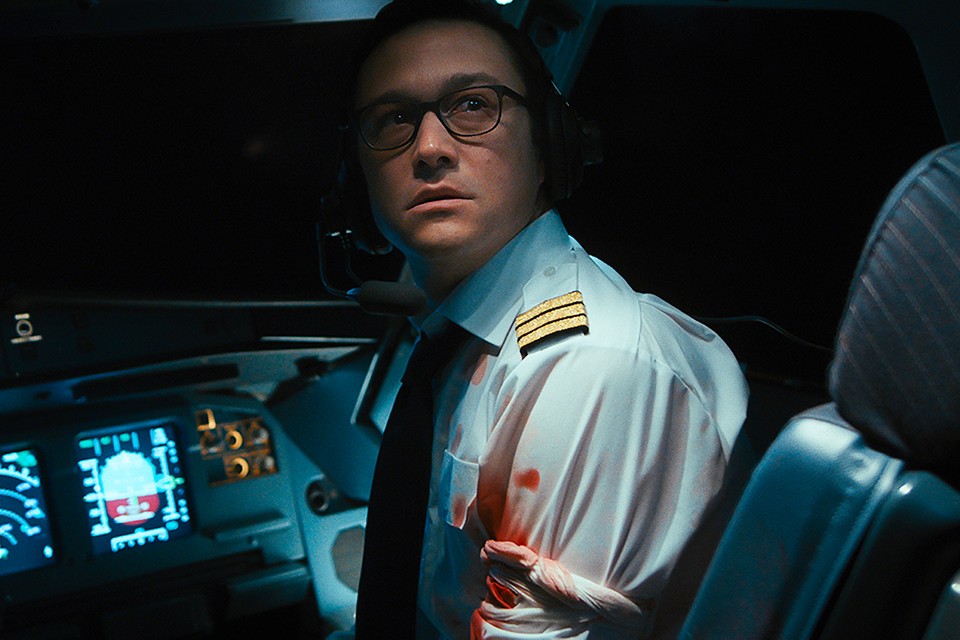 “7500 is a quick potboiler of a movie with a couple of fun storytelling devices and a good performance from Levitt.”

Not to be confused with the 2014 spooky film that starred Leslie Bibb and Turtle from HBO’s Entourage, 7500 is a hair-raising thriller set in the mile high club with a couple of gimmicks from German film director Patrick Vollrath. Starring Joseph Gordon-Levitt (The Dark Knight Rises), this suspenseful film barely allows room to breathe as a passenger airplane is hijacked by a group of terrorists with a Jr. co-pilot forced to take charge for the duration of the flight.

Vollrath deploys two instruments to tell his tale. One is that the film is told in real-time like a long episode of 24 and the other is 7500 takes place all inside one location, the cockpit of the airplane with Levitt virtually in every shot. These stratagems have been done before in movies such as Buried with Ryan Reynolds, Locke with Tom Hardy, or even the airplane film Non-Stop with Liam Neeson. Vollrath kicks it up a notch by not showing the rest of the plane and its passengers, but only Levitt himself, who can only see other people on a small colorless monitor in front of him. This angle keeps things claustrophobic for the most part, but the ride begins to wind down and tread water about midway through with one-note characters who only provide a dim explanation to further the story so it can stick a proper landing.

7500 follows Tobias (Levitt), who is co-piloting an aircraft with the Sr. pilot Michael in Europe. Tobias’ girlfriend is also on board as a flight attendant who is trying to keep their relationship a little under wraps. Shot in real-time, the plane takes off through the clouds and begins its soothing flight high in the air as both Tobias and Michael talk about life. Suddenly, a group of Muslim terrorists break into the cockpit, mortally wounding Michael, and getting a good jab at Tobias, injuring him. He manages to fight them off, locking the cockpit door. He radios ground control for help, which is when the terrorists start taking hostages with their makeshift knives and start their terror spree on the passengers if Tobias doesn’t open the cockpit door. Tobias is instructed not to leave the cockpit and must try to land safely and watch his passengers and girlfriend succumb to the evil of the terrorists whose motive and reasoning are too vague to elicit any real tension, being “we want to crash this plane because Americans are killing Muslims.

Even in the final act where Tobias tries to reason and bond with one of the young terrorists, a teenager, there’s no real connection there as Vollrath’s script doesn’t allow for any background or sympathy, but rather just action beats to get to the next scene, which is a funny element all in itself. Throughout the film, Tobias and the main terrorist, along with a few other characters all end up passed out or unconscious on the floor or a seat, which takes away some of the tension from happening. Again, since Vollrath never leaves the cockpit, there is no anxiety about what any of the other passengers are dealing with outside in the main cabin unless Tobias looks directly at the screen to see it.

That all being said, 7500 is a quick, energetic ride that has some similarities to Captain Phillips with Tom Hanks in more ways than one story-wise, but a poignant and significant message is missing entirely here. Gordon-Levitt turns in a solid performance, mixing the struggle of watching horrific acts done to people he loves while trying to maintain calmness in order to land a plane safely on the ground. The sound design is truly phenomenal as well with some fantastic and remarkable sound effects that rock the film from inside the cockpit with virtually no musical score, which amps up the suspense in certain sequences.

7500 is a quick potboiler of a movie with a couple of fun storytelling devices and a good performance from Levitt.

WATCH IT ON AMAZON PRIME!