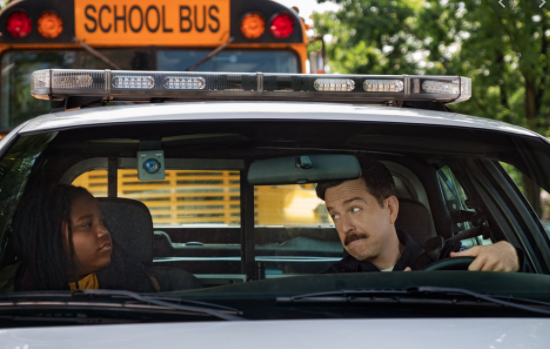 “Coffee and Kareem” fails to deliver on laughs and fun.”

Burt Reynolds in Cop and a Half must have made quite the impression on filmmaker Michael Dowse (Stuber, Goon) because he took that formula of a police officer who is paired up with a young kid to solve a crime he witnessed, and essentially remade that movie into a vulgar modern-day re-telling called Coffee and Kareem, starring Ed Helms and Taraji B. Henson. The result is a film that lacks any real likable or relatable character, an awful script full of unnecessary expletives that goes nowhere, and a lazy eye for action-packed sequences. Needless to say, Coffee and Kareem fail every cinematic or entertaining test miserably.

On paper and in the promos, Coffee and Kareem looks excellent. The vintage-like artistic poster evokes a 70’s era of action comedies, while the set up of an older white guy and a younger black kid teaming up has a ton of comedic potential, and even the trailers evoke some fairly funny sequences that were sure to promise some gut-busting laughter. That’s not the case whatsoever as every bit of vulgar dialogue, including hundreds of F-bombs and C-bombs are completely forced and unnatural and simply exist to shock, but provide no laughter at all. Unfortunately, that’s one of the fatal flaws in the film. 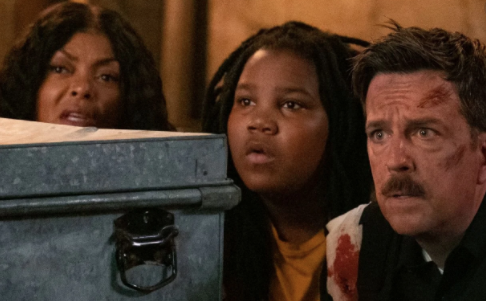 Coffee and Kareem centers on Officer James Coffee (Ed Helms), a nice, shy guy who is secretly dating and in love with Vanessa (Taraji B. Henson), a single mother to the middle-school-aged Kareem (newcomer Terrence Little Gardenhigh), who does not approve of his mother’s relationship, or really of anyone who doesn’t fit his needs. He’s not exactly a good kid. Kareem devises a plan for Coffee to pick him up from school and take him to his friend’s place, in order to have him killed because he just doesn’t like the guy. One at the rendevous, Kareem witnesses a murder and the two are on the run from being killed by the villains. Add to that the side plot of a few dirty cops who are working with these bad men, who include David Alan Grier and Betty Gilpin (The Hunt, Glow). None of it makes sense, however.

There’s no real relationship with any of the characters other than that they exist. The chemistry between everyone is terrible and is awkward from top to bottom as most of the dialogue is just hurling insults at one another that never sticks the landing. There is one quick sequence where Coffee and Kareem are having a father/son type of moment as he explains to the young kid on how to speak with women, but it’s completely lost seconds later when the kid asks to see a stripper’s tits at a strip club.

As far as performances go, it’s shocking that anyone really said “yes” to this movie, but at least Betty Gilpin knew exactly the type of movie she was in and plays her villainous role so over-the-top that it can compete with an animated superhero villain. The rest of the cast play it simple and straight for the most part. There’s really nothing to like about this movie, which is upsetting because the promos for the film were top-notch and promised something fun and funny, which Coffee and Kareem did not deliver on both fronts.