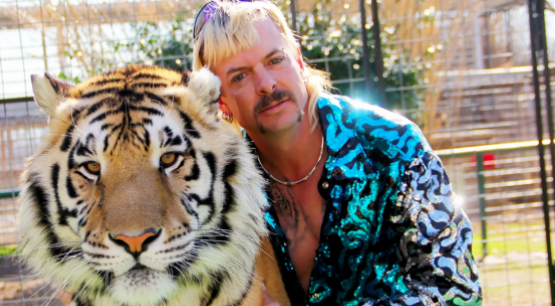 “Tiger King: Murder, Mayhem, and Madness one of the best and strangest documentaries to ever be filmed.”

Netflix has unleashed the wildest, most untamed documentary series to date with Tiger King: Murder, Mayhem, and Madness that defies all logic, constraint, and humanity. It’s one of the best and strangest documentaries to ever be filmed and has enough deranged and bizarre characters and real-life stories to fill 100 hours of screen time. The filmmakers behind this series Eric Goode and Rebecca Chaiklin said it best, “It was sorta funny when we started, but it’s gotten really dark.” And that is saying it lightly because what is shown on film is so intense and otherwordly, that it’s unbelievable, however, it all happened. Goode and Chaiklin recorded everything.

One of the best ways to figure out a subject for a documentary is to blindly stumble onto something that wasn’t there before. In this case, Goode and Chaiklin were filming something about snakes and reptiles when suddenly someone showed up with a snow leopard in the back of a van on a hot summer day in Florida, looking to sell this big cat. This put the duo filmmakers on a life-threatening journey for five years on the business of breeding large cats (lions, tigers, and panthers) and selling them on the black market.

Tiger King starts out with a message of the legality of this whole business and caring for these animals into something way more sinister as three main characters are introduced. The Tiger King himself is known as Joe Exotic, a gay redneck with a mullet, who has multiple young husbands, sings country ballads about large cats and killing people. Another is Bhagavan “Doc” Antle, who is responsible for providing some large cats for Hollywood films but also has a harem of very young wives who work and live with him. The final character out of all this is a soulless woman named Carole Baskin, who is the big cat activist and head person in charge of Big Cat Rescue. Oh, and she most likely had her first husband killed and fed to her tigers. These three people all hate each other and have large cat farms in which they exploit baby tigers and other exotic animals for personal gain and wealth. 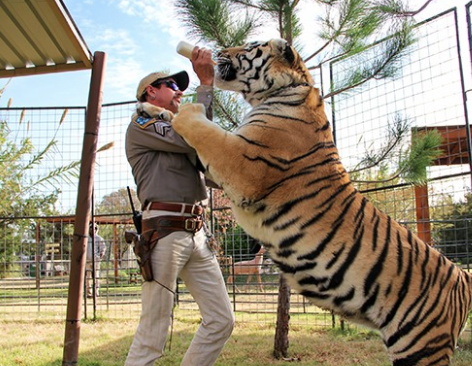 What Tiger King does perfectly is constantly switching the narrative in each of the seven episodes. Not because it’s an ill-informed story or chaotic way of storytelling, but because the events that unfold during the course of these five years are that rowdy and uncontrolled. The directors are holding on for dear life to not get caught in the crossfire here as these three people resort to violence and arson against one another. It’s not just about these three leads either, but a healthy dose of co-workers and co-conspirators, who most have been in prison, or purchase tigers for sex orgies in Las Vegas, and more. This all is brought fantastic unbridled light even before Joe Exotic decides to run for President of the United States and Governor of Oklahoma, and way before he hired someone to kill the Big Cat Rescue lady.

People’s limbs are ripped off by tigers, co-workers commit suicide, and friends become bitter enemies in this seven-episode series, which is all caught and shown on film. There is no shortage of outrageous characters who are more than willing to tell the tale of Joe Exotic, Doc Antle, and Carole Baskin here with each story being more extravagant than the next.

The sad and unfortunate thing about Tiger King is the treatment of these animals. It seems like nobody actually cares for these creatures in a humane way, although they keep telling the camera they do. What started out as some whacky people trying to run a petting zoo turned into a murder for hire plot that left the animals on the backburner where some of them passed away. It’s a bigger conversation to have, but Tiger King is for sure the wildest true story to ever be told and captured on camera.

WATCH IT ON NETFLIX