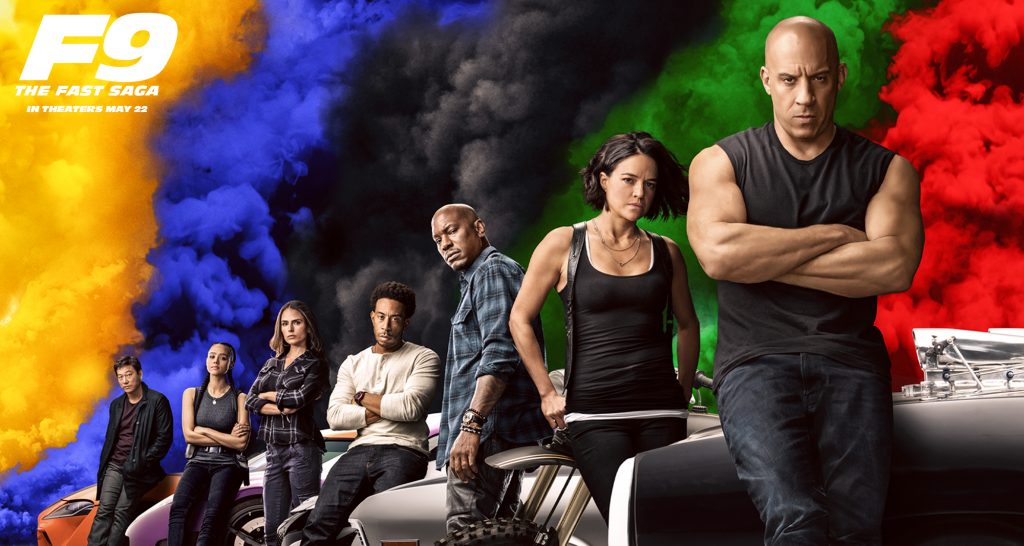 The Fast & Furious movies, or as the studio now wants us to call it: The Fast Saga, has been a rocket ship to the moon of ridiculous for the past decade. Every sequel gets bigger and crazier. We’ve had skyscraper jumping, parachute cars, using a car as a murder weapon, pushing a torpedo on ice with your hand while fighting a submarine, the list goes on forever. Well, what a glorious day it was for me this weekend when a new almost four-minute trailer for the latest Fast Saga Film F9 made its way into these eyeballs. This trailer is more absurd, fun and insane than almost any of the other movies. This crew started stealing blu ray players from trucks and is now “Tarzan-Swinging” a car over a cliff… I can’t get enough of how wild this trailer is. So watch the trailer then check out my scientific breakdown with time stamps.

We see that Dom Toretto and Letty have settled on a farm in their matching white tank tops with some young Samoan child they named Brian. If you forgot…this child is the baby that Jason Statham rescued at the end of Fast 8 from a crashing airplane. We see Letty give little Brian the necklace for “protection”.

“No matter how fat you are, no one outruns their past.” This line is said by the Shakespearean trained Vin Diesel will clips of dune buggies blow up. They do show the assembled crew of Tyrese, Ludacris, and Khaleesi’s handmaiden in some bunker planning something.

Ridiculous moment alert number one: Letty gets knocked off of a motorcycle while jumping high in the air and Dom uses his car hood to catch her because he has a pillow hood.

The crew is captured by SWAT looking people and we get our first look at John Cena who is sporting just a silly amount of hair.

“So we are up against a master thief. Assassin. High-performance driver.” Intercut with John Cena’s hair doing stunts.

1st: John Cena has a car flipped at him and he appears to catch it wearing some sort of suit.

2nd: Dom is in some prison holding back at least 25 guards with his 2 arms.

We learn that John Cena is Dom’s brother who is named Jakob. You know he is a badass because his name has a K in it. The Toretto family had two sons one named Dom and the other Jakob. Weirdos.

Charlize Theron keeps collecting them paychecks and gives us some backstory on Jakob always wanting to be better than Dom for his whole life. I have seen 9 of these movies and all Dom talks about his family but he forgot he has a brother who literally shares all the same interests as him? Tough break Jakob!

Dame Helen Mirren tells us there is nothing more powerful than the love of family unless you turn it into anger. Nothing interesting here just wanted to remind people that Helen Mirren is somehow an integral part of this series.

We get a car with a rocket engine strapped to the roof! WE ARE GOING TO SPACE! SPACE CARS!

Apparently, the Fast director watched The Dark Knight and just stole the truck flipping scene. This made me angry but then I remembered that 40% of the audience going to see this movie opening day probably hasn’t seen The Dark Knight… sad.

Ridiculous moment alert! We get a car driving across a rope bridge!!!

HOSE YOURSELF OFF! THIS IS WHERE THIS TRAILER REALLY GETS GOING!

Jakob the Hair and Dom are driving on some island that looks like the first level of the Sonic the Hedgehog game when Jakob’s Mustang accelerates and launches off of a cliff. Then a damn plane flown by Charlize Theron flies in out of nowhere and uses some magnets to catch his car in midair and fly off. How high was everyone involved in making this movie? The only other explanation is the consultant is my 4-year-old son who regularly launches cars off of beds into planes and trains and sometimes dinosaurs.

Dom is not even remotely phased by this event. He just watched a plane catch a car in midair so what does he do? He “Tarzan Swings” his car. How does he accomplish this feat? Math? Science? No. Guts. He tells Letty “Hold on!” and drives at the post of the destroyed rope swing that still has a rope to the other side. He hits the post so hard that it (naturally) gets locked in his wheel and he uses the rope tension to swing to safety. Dom had the math numbers fly in front of his face like Alan from The Hangover at the Blackjack table and realized that scientifically the best course of action was to swing his car. This series legitimately makes more sense if it ends up in space than half the things I saw happen in this trailer.

As a final tease, they reveal that Han is back. Just to remind you that Han died in Tokyo drift, the end credits of Furious 6, and the opening scene of Fast 7. In a franchise where cars can now fly and swing from the vines, it isn’t shocking to bring someone back but they legitimately have made him die in 3 movies. I can’t wait for the retconned explanation of how he is alive. There is nothing wrong with this franchise. Long live the Fast Saga, may it gives us insanity every 2 years for the rest of our lives.