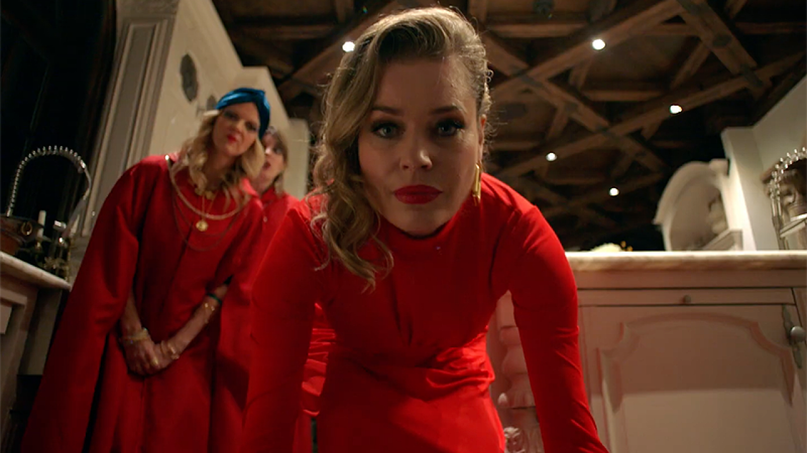 “‘Satanic Panic’ is a lazy attempt at what could’ve been good horror.”

A new horror-comedy called ‘Satanic Panic‘ is here that stars real-life couple Jerry O’Connell and Rebecca Romijn, Hayley Griffith, and Ruby Modine in a blood-drenched romp about wealthy satanic worshipers who are in dire need of a sacrifice of the virgin kind. The two genres don’t mix well here as filmmaker Chelsea Stardust can’t seem to handle the amusing characters without making them over-the-top parodies of themselves. It’s a fun setup for sure, which we’ve seen handled better in other films, but the payoff is lackluster and none of it makes any sense and that’s a shame because this could’ve been a highly entertaining new horror film. But it isn’t.

Shot in Dallas, TX, a young starving-musician named Sam (Hayley Griffith) decides to get a part-time job to make ends meet as a pizza delivery person. An order comes in and she’s off on her boke to deliver the sweet cheesy meal when she gets more than she bargains for. As she pulls up to this elegant and luxurious mansion, the guy stiffs her on the tip in a rude way and takes the pizza. Sam should’ve called it a day, but instead, she tries to get her tip and is held against her will by a group of Satanists led by Danica Ross (Rebecca Romijn). There is to be a virgin sacrifice to bring upon the demon by way of Danica’s own daughter Judi (Rubi Modine), but Judi is not so much a virgin anymore, which leaves Miss Pizza Tip the #1 contestant on The Price is Satanic Sacrifice.

From here, Sam tries to escape and enlists the help of Judi to stop the Satanic ritual and get out before meeting their demise. Being a horror-comedy, you would think there would be quite a bit of hysterical moments in which we get to see a pizza delivery girl battle an elite group of older people hell-bent on bringing the desolate one, but that’s not the case. Stardust instead goes for cheap one-liners that are very cringe-worthy along with a campy outlook that entices groans rather than enjoyment. Performances are all excessive and needless. Jerry O’Connell is the only actor that seems to be in on the joke here, where his short scene is the only one that’s any fun. 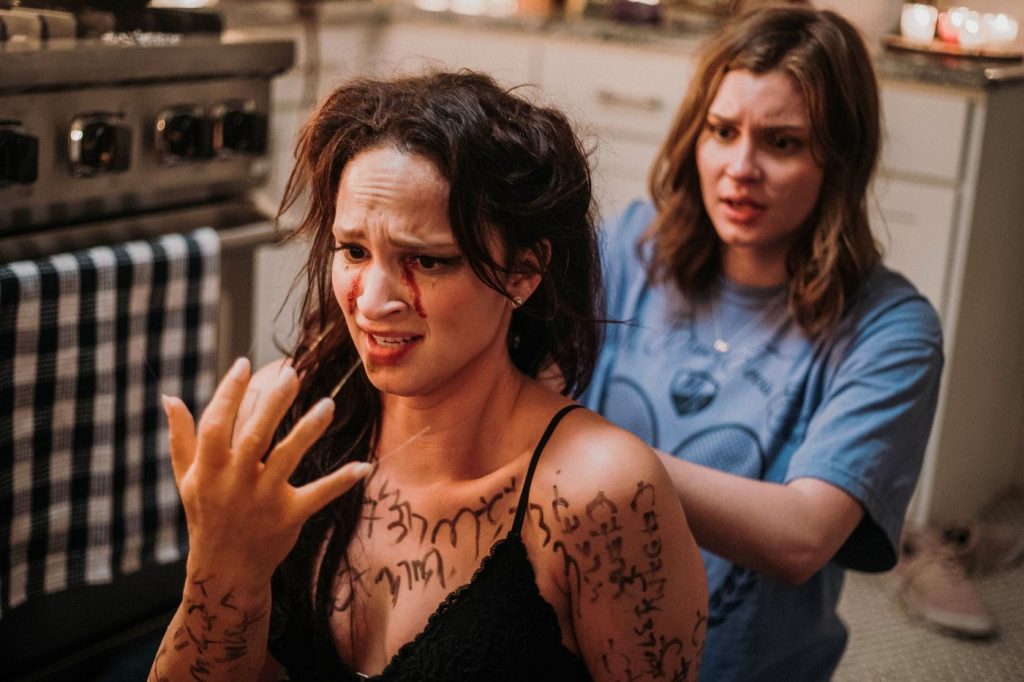 Novelist and screenwriter Grady Hendrix had a good story here, but something got lost in translation here. The amount of satire that could have been examined in a satisfying way, such as the 1% can get away with anything – like virgin sacrifices on the poor. It kind of writes itself with that aspect, but again, cheesy one-liners and stupid interactions plague this film from start to finish.

For those who love blood and guts of the practical variety, you’re in luck, because Stardust lets the red river flow often with entrails and bodily explosions, but that’s not what should carry a horror movie. In fact, a lot of that is for mere shock value and has no reason to further the narrative at hand. What started out as a comedic horror movie, ended with something much different in its long-winded climax. ‘Satanic Panic‘ is a lazy attempt at what could’ve been good horror.