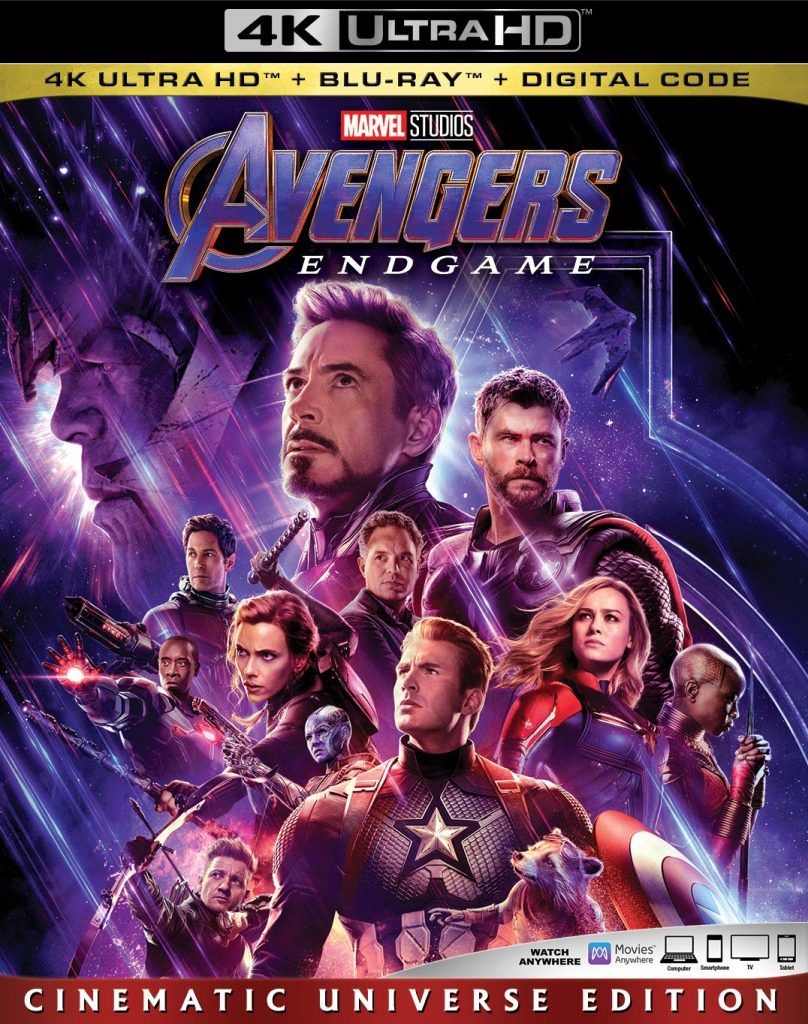 The culmination of everything we’ve seen in the Marvel Cinematic Universe since the first Iron Man movie in 2008 is here with Avengers: Endgame. Back in 2008, a few people had a big idea for us comic book fans. That idea started with Iron Man, where at the end of the film, Samuel L. Jackson showed up and wanted to get a team together. That team would be the Avengers, that would go on to team up everyone’s favorite superheroes, including Captain America, Thor, Iron Man, Hulk, Black Widow, Hawkeye, Black Panther, Spider-Man, Dr. Strange, Captain Marvel, Ant-Man, The Wasp, The Guardians of the Galaxy, Scarlett Witch, Vision, The Winter Soldier, and a few others. Spread over the course of ten years, these filmmakers and Marvel Studio execs have crafted an intense storyline that has continued over the last decade with rich and iconic characters that have had their own movies to shine, along with teaming up here and there to take on bigger threats.

Since the first Avengers film, the real big threat was revealed to be Thanos, an alien who wanted to take the Infinity Stones so that he could snap his finger and instantly destroy half of all life in the universe. If you were paying attention to the past Marvel movies, you’d see that he was successful in gearing up to that destiny and with the previous Avengers: Infinity War film – well, we all know how that turned out. Anthony and Joe Russo are back in the director’s chair to bring this multi-billion dollar franchise to a close with Avengers: Endgame in their three-hour opus. It’s a quick three hours as well, so don’t worry about being bogged down by dragging dialogue or side tangents. Every action and conversation is earned and means something here as the Russo’s have mixed a perfect batch of emotions, comedy, and major thrills one last time.

This climatic film, of course, follows the events of Avengers: Infinity War, where we see the remainder of the superheroes trying to pick up the pieces and figure out a way to fix everything. What’s great about it is that everything we’ve seen in the trailers, basically happens in the first thirty minutes of the film, leaving the remaining 2.5 hours in uncharted territory and oh boy, does it deliver on every level. In Avengers: Infinity War, there were a couple of moments in that film where you wanted to stand up out of your chair and yell cheers and applaud, particularly the scenes where Captain America showed up behind the moving train and caught the spear weapon. The other was when Thor and Groot showed up in Wakanda and wreaked havoc together. Those two scenes evoked so much joy, thrills, and excitement that you can ‘t help but want to scream and call your hands in happiness. In Avengers: Endgame, there are a couple of moments like that as well, but you can amplify them by 10,000. Yes, it’s that good.

The characters we have come to know over the years have all grown and transformed into something more than we first met them. The Russos have perfectly showcased the very tiny and subtle changes throughout the film, some of which are physical changes, where others are harder to see, but it’s spectacular to see these little moments played out, which are sure to conjure up some emotions and understanding. It’s a beautiful thing to see transpire on screen for sure.

In the end, Marvel has made a successful and wonderful go at the superhero franchise. While this feels like the conclusion, we all know there will be more, but without certain characters. Avengers: Endgame feels like the end for some of the characters as we’ve come to know them, however, the film is riddled with very small tidbits of furthering a storyline with many of its characters and I do hope at some point down the line, we will see them again, but for now, this was the perfect sendoff to some of the most entertaining motion pictures that have ever been put on screen. It was done with love, elegance, and fun, making Avengers: Endgame the perfect ending to the biggest franchise in history. 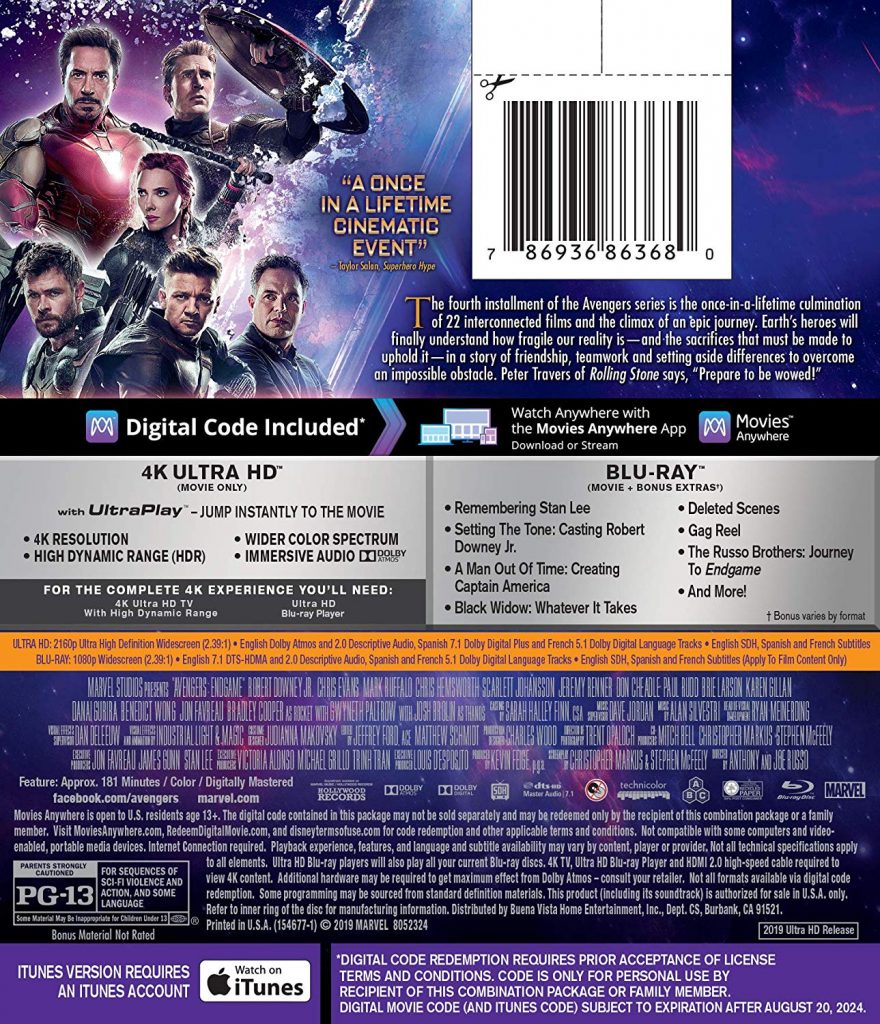 The finale of this current MCU franchise looks amazing in this 4K UHD presentation. ‘Avengers: Endgame‘ was shot digitally and finished at 2K, but upgraded to 4K for this release. It was most likely finished at 2K, due to the overwhelming CGI throughout the film. If it was shot and finished in true 4K, it wouldn’t have looked this good. With its 2160p and HDR10 color palette, this image is an upgrade from the Blu-ray version, but it’s not a revelation. The color and detail have certain upticks, which fans should appreciate.

The detail is sharper and bolder in every lighting condition. The intricate details in Captain America and Ant-Man’s costume look incredible, where you can see every texture and fold as their bodies move. Facial features, such as Hulk’s chin stubble, individual hairs on Thor and Rocket, and wrinkles on everyone else are easily seen. Makeup wounds and the snap dust is clear and vivid too. Background images of rock formations, broken skyscrapers, and more all have excellent detail in the background, giving the image quite a bit of depth. The time-travel uniforms, which were completely CGI look phenomenal as well, showcasing some unbelievable detail from the helmets to the boots. You won’t be able to tell what is real and what it is not.

Colors in the HDR10 spectrum are stronger and more eye-catching. The various shades of blue, red, and gray in the costumes are refined and satisfying. The many colors of the quantum realm are bright and intense as are the darker sequences that showcase deep black levels and more earthy colors better. The film can go from a bleak and gloomy outlook to a very colorful pasture with bright primary colors in an instant, which this video presentation handles perfectly. There were no issues with crush or murky shadows, along with zero instances of any banding or aliasing. What a lovely picture this turned out to be and is a worthy upgrade.

The 4K UHD Disc comes with a Dolby Atmos audio track while the Blu-ray Disc delivers a lossless DTS-HD MA 7.1 option. Both sound excellent, but the Dolby Atmos mix is the ultimate one to listen to and is reference level. Most previous Disney Blu-rays and 4Ks have had a softer audio mix, where you’d have to adjust your volume up a bit to have a normal sound. That’s not the case with ‘Avengers: Endgame‘. This audio track is commanding at every turn with robust, loud sound effects that are realistic and well-balanced. The nuanced weapon sounds, kicks, and punches are at full force and you can hear the impact.

There are softer scenes where ambient noises in a larger room have the necessary reverb and echo that sounds excellent. The big action sequences provide a fully immersive experience with heroes and villains flying all over the place with big explosions and debris exploding everywhere. The height speakers come into play here where it sounds like the Marvel Cinematic Universe is hovering over you. Each sound movement is fluid and smooth from one speaker to the next. Ambient noises are impactful and dialogue is crisp and clean. The amazing score adds all the necessary weight and emotion to each scene as well. This is one reference-quality Dolby Atmos track. 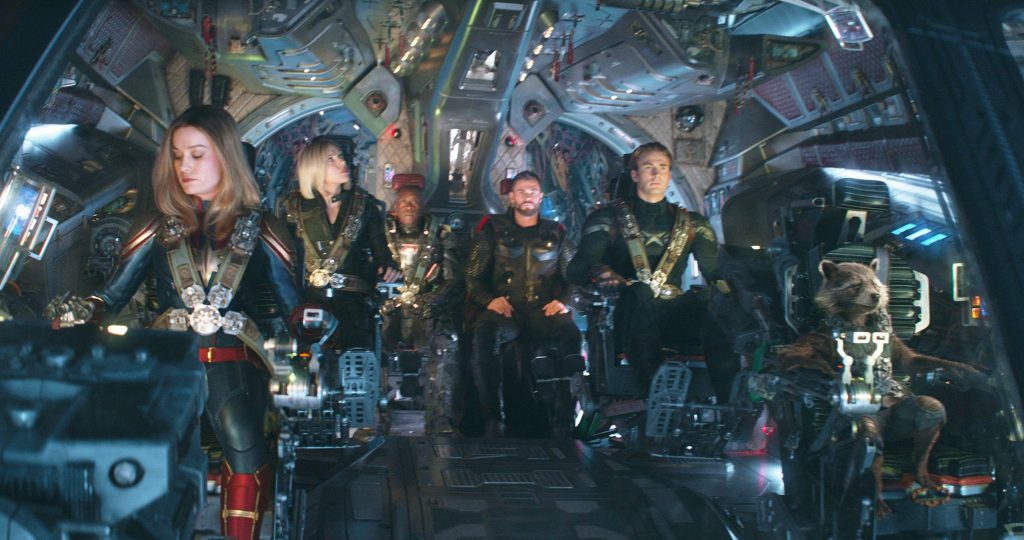 There is only 54 minutes of bonus features included here, plus a commentary track from the directors. It’s a shame too because this could have been an excellent bonus feature section that went into the visual effects and more. Unfroaintatly, that’s not the case. Instead, there are several EPK segments that have cast and crew interviews giving praise to each other and showing clips from the whole MCU franchise. Note: that when you download the Digital Copy, you get a bonus extra of Steve Rogers and Peggy.

Audio Commentary – Directors Anthony and Joe Russo and writers Christopher Markus and Stephen McFeely deliver an informative commentary track that discusses bringing all the characters together, performances, visual effects, and easter eggs. It’s a solid listen for the finale of the biggest movie franchise.

Intro by Anthony and Joe Russo (HD, 3 Mins.) – The directors talk about the grand scale of the final film, the emotional performances, and more.

Remembering Stan Lee (HD, 7 Mins.) – This pays tribute to Stan Lee, creator of all the Marvel characters in the films. Clips are shown of his cameo appearances and on set footage from each Marvel movie and the creator interacting with the talent.

Setting the Tone: Casting Robert Downey Jr. (HD, 6 Mins.) – Another piece that looks at Robert’s portrayal of Tony Stark and Iron Man through the film franchise.

A Man Out of Time: Creating Captain America (HD, 12 Mins.) – A longer featurette that focuses on the character, Chris Evans’ performance, his character arc through the series, and more.

Black Widow: Whatever it Takes (HD, 8 Mins.) – Yet another glimpse of the Black Widow character, Scarlett Johansson’s performance, the background and tone of the character, and more.

The Women of the MCU (HD, 5 Mins.) – This showcases where the women of Endgame band up in the final scene and fight and how much fun they had on set.

Bro Thor (HD, 4 Mins.) – A great look at Thor’s character arc through the series and how amazing Chris Hemsworth is in the role and as an actor.

Deleted Scenes (HD, 5 Mins.) – There are a few quick scenes that were left out of the film for time and pacing, but are worth your while.

Steve and Peggy: One Last Dance (HD, 2 Mins.) – This shows the relationship betweetn Peggy and Steve throughout the franchise, leading up to their dance. 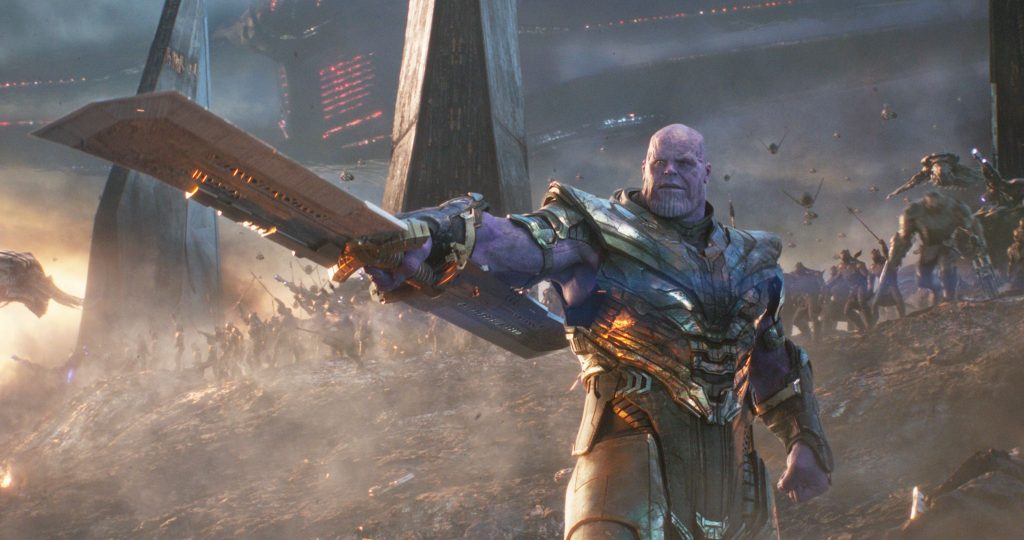 After 22 films, the MCU is over with this current cast of characters and actors. For the future, we will be introdfued to new heroes and villains and we’ll see what the new universal threat is. With ‘Avengers: Endgame‘, it’s safe to say that this is the biggest undertaking of a film ranchise in history and the cast and crew did a marvelous job with this big finale and sendoff. What a wonderful movie that checks all the boxes. The Dolby Atmos audio track is demo worthy and the 4K UHD with HDR10 is a slight upgrade from Blu-ray. The bouns features are worth your time, however, there isn’t a lot of real behidn the scenes work here. HIGHLY RECOMMENDED!