The horror genre is something sacred and entertaining. It can be whatever you’d like it to be from something of a masked killer on the loose slashing their way through unsuspecting teenage victims to a literal hell unleashing in space to something much more quiet and unnerving like family being torn apart by a demonic entity and everything in between. Jordan Peele has crafted his own horror universe and elements and is 2/2 (so far) in drilling the nail into that horror membrane with precision and accuracy. His latest film simply titled ‘US‘ is much more than a straight out horror film, but something that makes us think about our past, present and ultimate future with each other. I’m happy to say that ‘US‘ is a true masterpiece in horror.

With Peele’s first feature film ‘Get Out‘, we got a glimpse into his complex mind and filmmaking techniques with a seeming romantic comedy that turned into a horror/thriller of epic proportions that satirized our current silly state of politics and social expectations. Needless to say, ‘Get Out‘ and Peele won numerous awards including an Oscar (well-deserved).

‘US‘ takes things a step further into the horror genre and we see what Peele can do and play with in this beloved horror landscape as he conjures up some of the scariest moments of recent memory in motion pictures. This is a down-the-line horror film at every turn, but Peele slices his way through more of our current political and social climate that causes us to question our very existence and choices. And holy shit is it frightening.

With no spoilers attached here, the film follows the Wilson family, led by the father Gabe (Winston Duke), the mother Adelaide (Lupita Nyong’o), the daughter Zora (Shahadi Wright Joseph), and the son Jason (Evan Alex), who all head to their summer vacation spot in Santa Cruz. Even their friends the Tylers (Elisabeth Moss and Tim Heidecker and their two teenage daughters) are vacationing a couple doors down as well. All seems quiet, nice, and simple, but in a flashback sequence to when Adelaide was a young girl, she had a terrifying experience at the same beach inside a hall of mirrors funhouse.

Now Adelaide is a grownup mother of two, is back in the same spot where Peele pours the sense of dread and horror so thick that we anticipate any minute something terrible is going to happen. Things go from bad to worse where (as we see in the trailer for the film), a family dressed all in red shows up at the Wilson’s house, which are all the doppelgängers for the Wilsons, but are brandishing gold, sharp scissors with the intent on using them to kill.

From here, Peele makes us literally sweat through our clothes and forces us to the edge of our seats with the terror these characters push out with some truly scary scenarios. It’s been a long time where I had to catch my breath watching a horror film, but here, I did quite a bit and I loved every single minute of it. Not only were the scares earned and top notch, but the dialogue was real, at times funny, and intelligent. While not standing on top of a box and preaching a message, Peele tells everything he wants to get across in such a subtle way that if you blink, you’ll miss it and that is extremely difficult to do. Peele does it with ease here.

Each of the Wilsons are basically playing two roles here, one of their true version and the other of their doppelgänger, which is quite a feat, but the real spotlight is on Lupita Nyong’o who just murders each scene she is in (all the pun intended). There are some great performances in horror films of the past 50 years. Linda Blair in ‘The Exorcist‘, Jack Nicholson in ‘The Shining‘, and Tim Curry in ‘IT‘. You can add Lupita Nyong’o to this list as she deserves all the awards for her dual performance here. She is that good and owns every piece of film she is in with ‘US‘. She is truly terrifying when she needs to be and is as magical and warm as a mother the next second on a dime. It’s unbelievably good.

The music of the film will have you dreaming of nightmares with The Beach Boys ‘Good Vibrations‘ and a new remix of ‘I Got 5 On It‘ that will send shivers up your spine. I can’t get those songs out of my head at the moment and I love that fact that now I think of horror when I hear these songs. Thanks Jordan Peele. ‘US‘ is the horror movie we’ve been waiting for, so do yourself a favor and get your ass up and watch it before it’s too late. 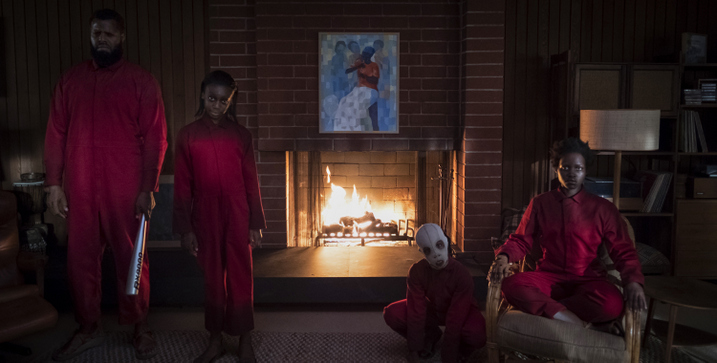 ‘Us‘ tethers its way to 4K UHD Disc with Universal’s 2160p/Dolby Vision presentation, which is not a major upgrade or improvement on the 1080p Blu-ray Disc. There are only minor upticks in color and clarity in specific scenes. The most noticeable source of reform is with the Dolby Vision color palette, which offers richer and deeper black levels. This is evident in the first scene of the film that takes place at nighttime at a carnival. The Dolby Vision captures the more intense black levels and shadows on the boardwalk of the carnival that contrasts nicely with the night sky. In addition to this, we see the brighter neon carnival lights that pop off-screen and give that luminance glow when the characters walk by. Also, when the power goes out at the house, we can now easily distinguish muted colors in the darkness, such as the red jumpsuits and wall shadows and black facial hair.

On the other hand, when we are in full view of the sun on the beach, we get to see brighter patches of sand, blue water, and the various colors of bolder primary colors in the beach towels and swimsuits. Again, this isn’t a major upgrade, but it’s noticeable. Detail also has gone uphill on this UHD image, which we’re able to see gory wounds, cuts, bruises, and practical makeup effects that are well tones and balanced. When Kitty’s tethered self puts on lipstick, you’ll notice her veins, heavy makeup, lines in her lips, and slashes on her face, not to mention her oily individual hairs. Also, Pluto’s burns on his face look exquisite too. There were no big issues with banding or aliasing as well, and the movie has a nice filmic look to it with healthy depth stability.

The Dolby Atmos track for ‘Us‘ sounds incredible and delivers all of the nuanced sound effects, atmospherics, and musical cues wonderfully. It’s not overly loud or has too much bass, but is rather well-balanced and necessary where it counts. The opening scene at the carnival provides a wealth of bells, whistles, people laughing and yelling, along with a distant thunderstorm in the background for ominous effect. This sets the stage for an excellent horror-themed audio mix. Loud thuds on doors, glass breaking, and footsteps are powerful and sturdy with a nice low end of bass this is never overpowering.

Smaller sound effects such as blood flying onto a surface or a small rabbit hopping along all can be heard without any effort. Overhead speakers rarely come into play, but when they do, you can rest assured you’ll hear a helicopter or rain falling down. Additionally, the music of the film plays a major role in the film and each musical note and song sounds fantastic with the right amount of bass and treble. It really gives the film life in a very haunting sense. Lastly, the dialogue is clean and free of any issues. 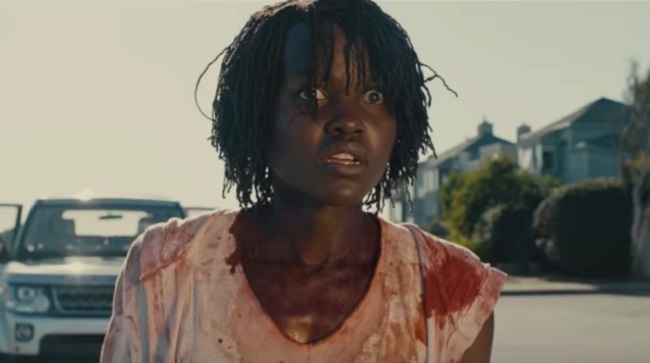 ‘Us‘ comes with several bonus features that break down the filmmaking process, the actors playing two roles, a love of the horror genre, deleted scenes, and more. Unfortunately, there is not a commentary track.

The Monsters Within Us (HD, 5 Mins.) – This focuses on the four main actors playing the dual roles in the film and how it challenged them.

Tethered Together: Making Us Twice (HD, 8 Mins.) – Again, this also looks at the actors playing both roles in key sequences.

Redefining a Genre: Jordan Peele’s Brand of Horror (HD, 6 Mins.) – Jordan Peele and the cast of the film talk about the horror genre and their favorite horror movies.

The Duality of Us (HD, 10 Mins.) – Jordan Peel talks about his big fear of doppelgängers and some of the film’s themes and tone.

Becoming Red (HD, 4 Mins.) – Here is some great footage of Lupita Nyong’o getting into her tethered character in between takes.

Scene Explorations (HD, 8 Mins.) – There are three scene breakdowns where cast and crew talk about these three key scenes, show storyboards, and behind the scenes footage.

Deleted Scenes (HD, 7 Mins.) – There are six deleted scenes here, none of which added to the overall mytholgy or story of the film.

We’re All Dying (HD, 7 Mins.) – A montage of outtakes and footage from the beach scene.

As Above, So Below: Grand Pas De Deux (HD, 5 Mins.) – Here is Zora and Umbrae’s dance routine. 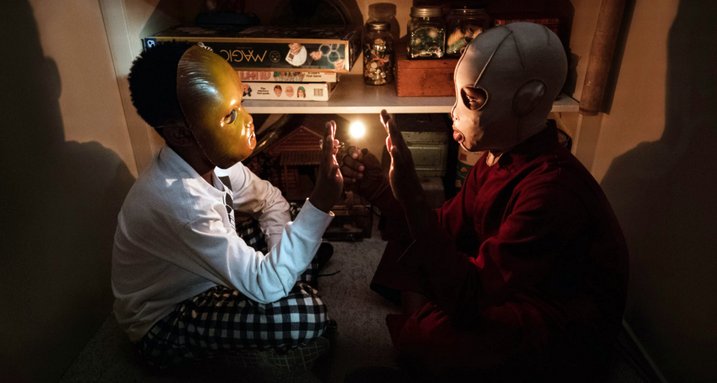 Jordan Peele’s second feature film is a home-run. ‘Us‘ is a well-crafterd horror movie with a ton of haunting theories, along with fantastic performances and one killer soundtrack. The 4K UHD/Dolby Vision video presentation isn’t leaps and bounds better than the Blu-ray, but there is a small noticeable upgrade. The Dolby Atmos audio track is wonderous and there are some good bonus fatures to boot. This one comes HIGHLY RECOMMENDED!