Helicopter blades whirl and fight against a hot and tumultuous wind. The lights come up and the curtain rises on a busy town scene full to overflowing with vibrant color. In walks purity personified as Kim (Emily Bautista), an orphaned woman from the rural areas of Việt Nam. When purity is presented, the vile and defiled will always come prowling, enter The Engineer (Red Concepción), a sleazy pimp that runs a brothel bursting with the promise of pleasure and sweet oblivion via alcohol, drugs, and whatever else. Dallas Summer Musicals presents Miss Saigon by Claude-Michel Schönberg and Alain Boublil, ultimately a re-imagining of Giacomo Puccini’s famed opera Madame Butterfly. 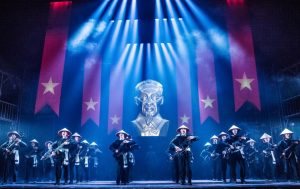 As Miss Saigon is primarily set in a brothel, expect major vulgarity and scantily clad women and one man (oh my, Ladies). This musical is not one for the kiddos. The set is bustling with the aroma of love, the stench of lust, and the sulfuric smoke of war. The moveable structures both pushed the narrative and allowed for a smooth transition between the acts. The blocking, especially between America and Việt Nam, gave such dimension and division. Costume design was well suited for the personalities and status. It was easy to tell the status of the character by their garments or lack thereof. The contrast of the colors symbolized the villains and the innocents.  Props were amazing! The audience was consistently wowed and shocked to attention.

The casts were so skilled and moving. Their voices from angelic and sweet to raw and earthly revealed the character’s motives and passions. Bautista’s ability to convey Kim’s innocence as well as strength was inspiring. Anthony Festa’s, the leading man, presentation of Chris was well delivered to the point of moving the audience to feel his war-weary soul. I was most impressed by the performance of Concepción as The Engineer. His take on this devious and campy character was very entertaining and kept the pace of the production from diving into the depths of depression. 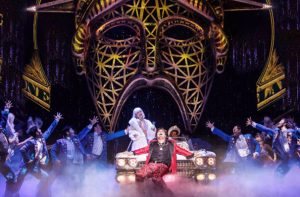 Overall, Miss Saigon was a brilliant telling of a heart-wrenching story of love and duty. The only concern I had was the volume levels of the musical score, which was so loud that it sporadically covered the dialogue. It was difficult to understand their words if they could be heard at all. Such a shame since the actors’ voices was powerful and poignant. Otherwise, this Broadway hit did not disappoint.