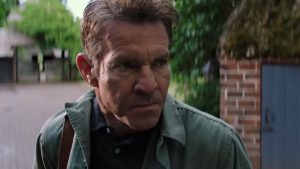 “The Intruder was suspenseful and sneaks up on the viewer.”

The Intruder’s opening sequence was a mix match. For what does an Audi commercial have to do with the storyline? The images of a car zooming in and out of traffic are exciting and punching though it does not establish the story or the couple. Though the cinematography was well planned and executed, the sound mixing was off in regards to levels. The songs were introduced in a manner that was jarring and distracting versus really pushing the narrative. The muting of the score and dialogue during Charlie’s rage moments were inconsistent ranging from too low to too high as well. The Intruder will remind you of the cinematic genius of Alfred Hitchcock with its villain shot angles, the use of a MacGuffin, shadow, mise en scéne, and psychological shot composition. The viewer will feel the frustration and trap of the story without question. Also, a little of Stanley Kubrick’s The Shining style rears its head as well, literally. Kudos to Deon Taylor, the director!

I love, love, love Dennis Quaid. Ever since Caveman when Quaid was cracking me up as Lar to Innerspace (one of my all-time faves) as Lt. Tuck Pendleton, being my hero/antihero in Dreamscape and Day After Tomorrow, or intriguing me with his commanding presence in G.I. Joe or Enemy Mine and yet still when he was the charming philanderer in Something to Talk About I have enjoyed his work, yep I had it bad. Quaid has an ability to make the viewer see him in so many different lights, a true actor. As Charlie Peck, he is sneaky, devious, creepy, and scary stealthy.

You’ll love to hate him. Michael Ealy is handsome, compelling, and usually brings a unique approach to his roles (Barbershop, Underworld: Awakening, and Think Like A Man). The docile sometimes sketch nature of Scott Russell is somewhat tricky to believe though. Coupled with the extreme naivety of Meagan Good’s character, Annie Russell, the lack of realism was a bit annoying. Good portrayed the witless damsel very well. Chica, I know you wouldn’t have been that special on your own. Why did the wife have to be so vapid, David Loughery, the writer? 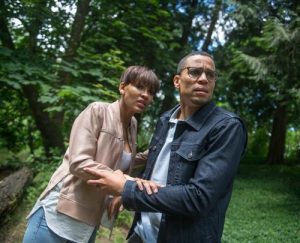 In the end, I enjoyed The Intruder as it was suspenseful and sneaks up on the viewer. In fact, I witnessed several viewers jumping in their seats or catching their breath often. A sound thriller was definitely needed as so many do not uphold the eerie feel from start to finish. Quaid reinvented himself, as I could not recall a film where he was an evil villain, anti-hero yes, but never the villain. He was so creepy that I had to do a double take to make sure he was my happy go lucky, calamitous hot rod. The creators even threw in a couple of brief sex scenes with Ealy and Good…