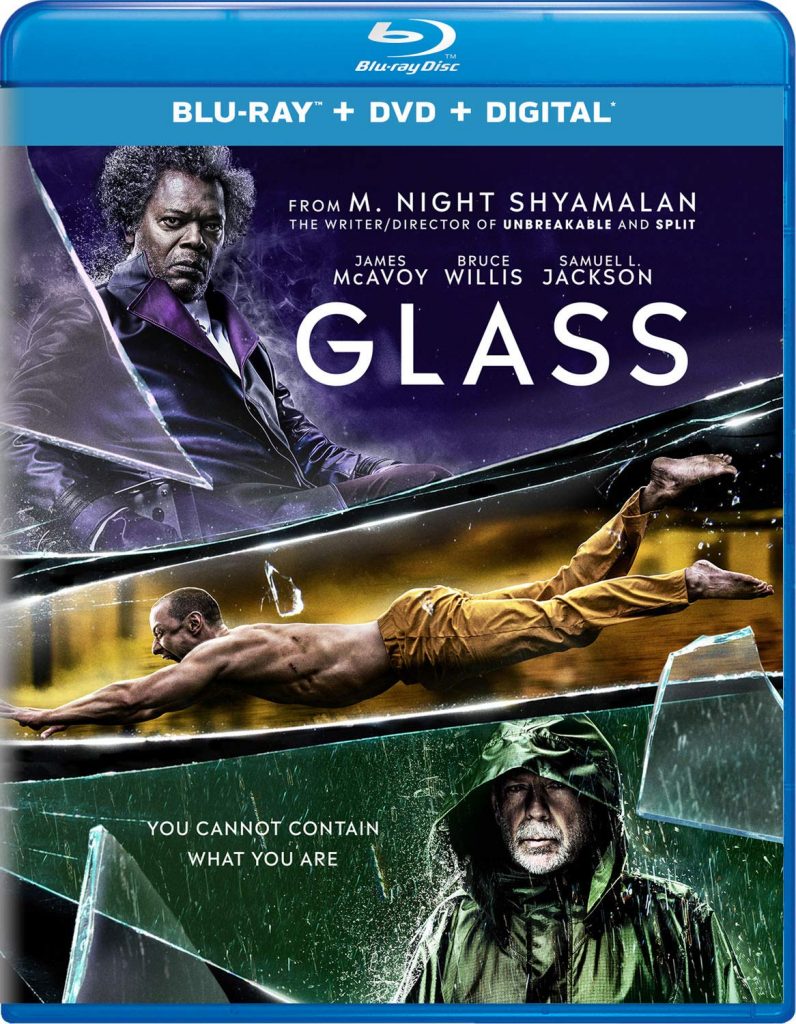 Finally, we got the conclusion to M. Night Shyamalan’s superhero opus with Glass, which was the third film in his amazing trilogy that was preceded by Unbreakable and Split. This new film brings back pretty much every single character from each film for the ultimate showdown and twist and Shyamalan did it perfectly. The 1080p HD video is wonderful and the killer Dolby Atmos track is something special. There is a ton of bonus features, but zero commentary tracks. This is a MUST-OWN Blu-ray!

I genuinely loved every single second of M. Night Shyamalan’s film ‘Glass’. It was the perfect end to a trilogy he started almost 20 years ago with ‘Unbreakable’. Since ‘Unbreakable’ debuted some 19 years ago, we have had a giant influx of superhero films with ‘X-Men’ films, the entire Marvel Cinematic Universe, and now the DC Comics franchise of films. I would like to say that this whole comic book craze mostly started with Shyamalan’s ‘Unbreakable’, which was his followup film to his breakout hit ‘The Sixth Sense’. Since then, we’ve come to learn and expect a certain level filmmaking and performances from superhero movies, mostly due to the phenomenal structure and execution of all the Marvel movies. There’s definitely a pattern there and it sticks the landing each and every time.

Shyamalan however, does not follow this pattern or code and does something completely on his own, which is a breath of fresh air and excitingly fantastic with ‘Glass’. Set 19 years after ‘Unbreakable’, but just three weeks after the events of ‘Split’, we see a bunch of familiar faces from both films, including David Dunn (Bruce Willis) and his now grown son who helps out at his home security store, the multiple personality man named Kevin (James McAvoy) and the girl that got away from him (Anya Taylor Joy), along with Mr. Glass himself (Samuel L. Jackson) and his now elderly mother. 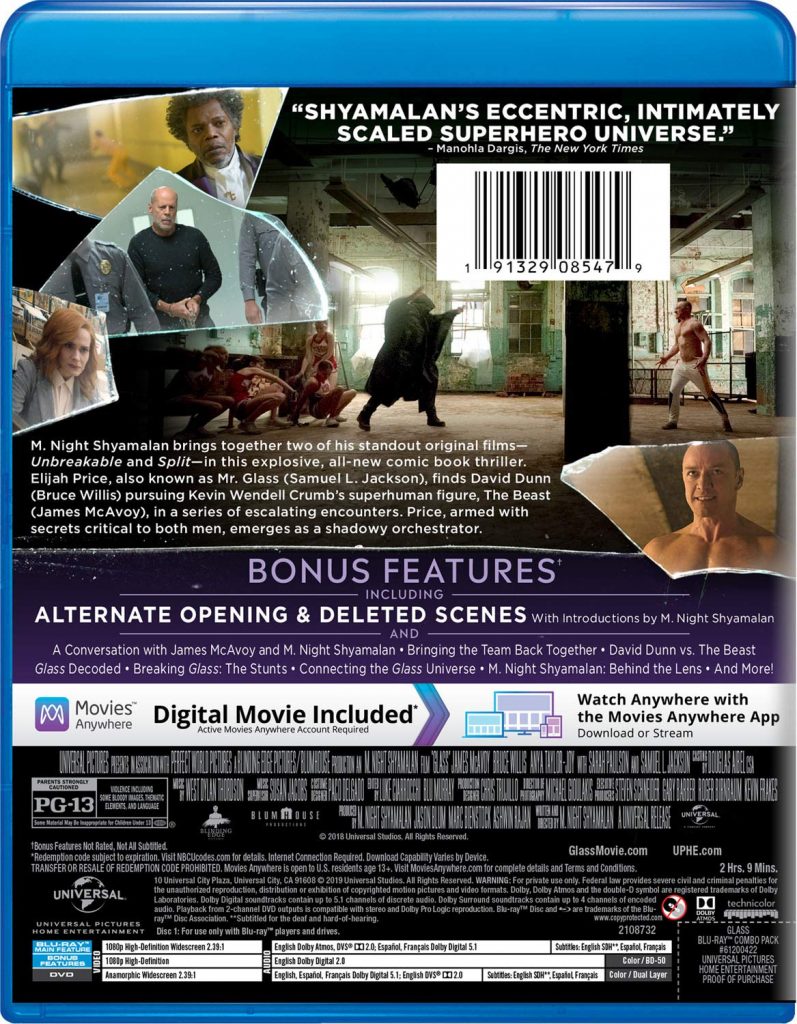 All three end up in a maximum security asylum where Dr. Ellie Staple (Sarah Paulson), a psychiatrist, tries to convince these three men that they have delusions of grandeur on superheroes and that all of their abilities and feats can be logically explained. To give anything else away would spoil the many surprises in store for you. What Shyamalan does with ‘Glass’ is something completely different than what we’ve been seeing in superhero movies for the last ten years. He has conjured up his famous slow burn that gives you crumbs for what’s to play out in a very suspenseful and unique way.

His camera angles and movements mean something here and hint at other things at play throughout the film where every frame looks oddly beautiful. The way Shyamalan shows his two decade old characters is amazing, which each of them still draw out life and meaning. If you’re expecting ‘The Avengers’ or something similar here, you’re gonna be upset, but that’s not the case with Shyamalan’s ‘Glass’. It never was.

This is a smart, innovative, character film about the existence of superheroes made in a very realistic world we can identify with. It’s done in such an elegant, organic, creative, and subtle way that every moment feels inspired and magical. Shyamalan had a vision long ago and he saw it through to the end, even if it took twenty years. ‘Glass’ is a damn treasure of cinema and I hope to see more motion pictures like it. 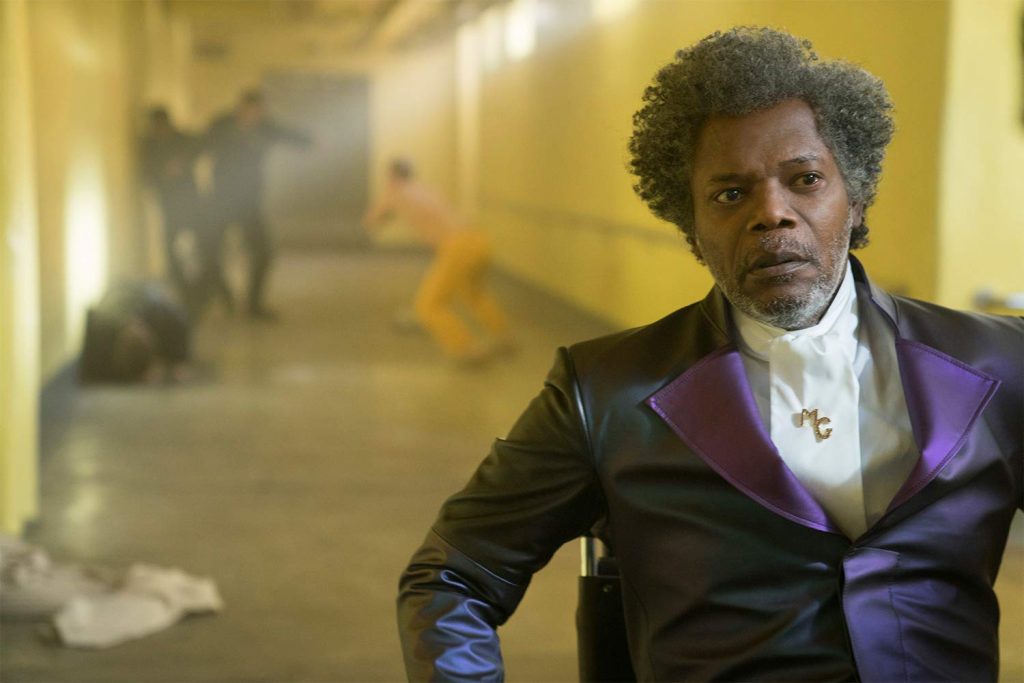 Glass comes with a great 1080p HD transfer and is presented in 2.40:1 aspect ratio. This digitally shot film looks magnificent in each scene with radiant color palettes and sharp detail. Shyamalan uses color to tell his story at the end of this trilogy un subtle ways. A lot of the film is subdued on the cool side of things that almost look like they’re decayed. A lot of grime browns, greens, blues, and grays can be seen easily with varying shades of lighting to back them up. However, when something “superhero” like happens, there are burst of bright primary colors abound, such as the red cheerleader outfits towards the beginning of the film that stand out nicely against the dank brick factory.

When the setting moves to the asylum, things are much cleaner and polished with more greens and whites. That is until the the three main leads end up in one room and we see yellow, green, purple, and pink, which is to signify the comic book setting, each color popping of screen with a strong, bold richness. It’s exquisite to say the least. Detail is very sharp as you can catch every individual strand of uncombed hair on Elijah’s face and head, along with facial pores and visual effects of The Beast popping up. The threads in the hospital clothes and textures in David’s raincoat also show up nicely. Black levels are deep and inky with no evidence of crush and the skin tones are always natural. There were no instances of any aliasing, banding, or other video noise to speak of.

Glass comes with an excellent Dolby Atmos track that truly satisfies. That being said, don’t expect a crazy action-packed sound design here with tons of explosions every few minutes. That’s not this movie. Instead, the atmospherics and subtle noises in the background is what we get here, and it’s phenomenal. The ambient noises in public settings always impress and are well balanced. The security store patrons and noises, as well as the school cafeteria and hospital all have their natural reverb sounds that make it immersive.

The more impressive noises come with the realistic slams, punches, and hits that pack a powerful low end of bass. There is quite a lot of depth to the action sounds here. Music always sets the stage with its remarkable score that always adds to the suspense and overall superhero feeling of the film. The height speakers also engage during rain storms, sprinklers, and other asylum noises, along with some mysterious growling, perhaps from the beast here and there. Dialogue is cleanly presented and is always easy to follow along with, even in the quieter moments. There were no pops, cracks, hiss, or shrills to speak of. 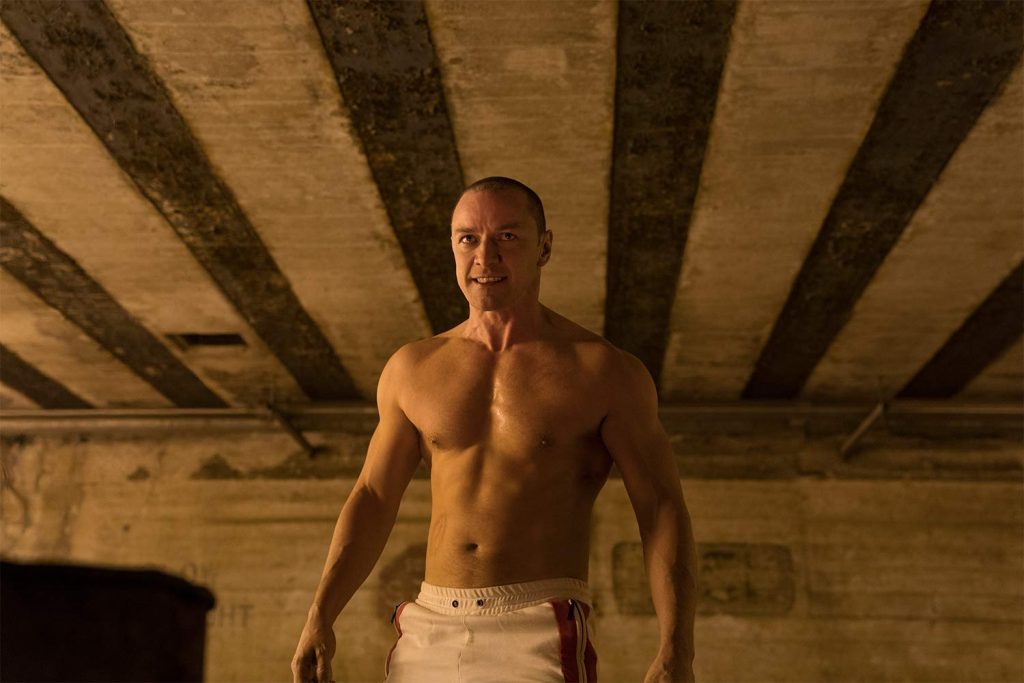 There are quite a few extras here, all are worth your time, and feature the entire cast and crew in some form or fashion. However, I do believe that each short featurette could be packaged as one whole 40 minute bonus feature instead of split up over 12 or so 2-3 minute extras. Again, these extras are worth it.

Alternate Opening (HD, 3 Mins.) – There is an alternate opening with an optional Shaymalan intro as to why he changed it in the final cut. It’s worth checking out though here.

Deleted Scenes (HD, 25 Mins.) – Again, this comes with optional Shyamalan intros and features several scenes that didn’t make the cut, but are all worth your time for sure. Each major player had some scenes cut and it’s worth your time to check it out.

The Collection of Main Characters (HD, 9 Mins.) – Cast and crew talk about the main characters of the film, their traits, mannerisms and what the actors brought to the roles over the trilogy.

A Conversation with James McAvoy and M. Night Shyamalan (HD, 5 Mins.) – The two men sit down together and talk about the superhero genre, the tone, themes, characters, and each film.

Bringing the Team Back Together (HD, 3 Mins.) – A brief glimpse about the small family of actors and crew who continue to work with Shyamalan on his movies.

David Dunn vs The Beast (HD, 2 Mins.) – Another look at the big fight scene towards the end of the film and how it was made.

Glass Decoded (HD, 3 Mins.) – A cool look at some of the props that returned to set from the previous films along with the movie’s color schemes and what they mean.

Breaking Glass: The Stunts (HD, 2 Mins.) – Another short look on one of the big stunts in the movie.

Connecting the Glass Universe (HD, 3 Mins.) – An all too short bonus feature that focuses on how all the film’s tie together with some Easter eggs of tone, themes, and things to look out for.

M. Night Shyamalan’s Behind the Lens (HD, 3 Mins.) – The cast and crew talk about working with the director and his style of filmmaking.

The Sound of Glass (HD, 2 Mins.) – Composer West Dylan Thordson talks about designing the music for the films and the tone of the music.

Enhancing the Spectacle (HD, 3 Mins.) – This explores some of the film’s visual digital effects.

Raven Hill Memorial (HD, 3 Mins.) – This takes a look at the real abandoned mental hospital that the film was shot in.

Night Vision (HD, 2 Mins.) – A short piece on how Shyamalan starts production on a movie and all that goes into it. 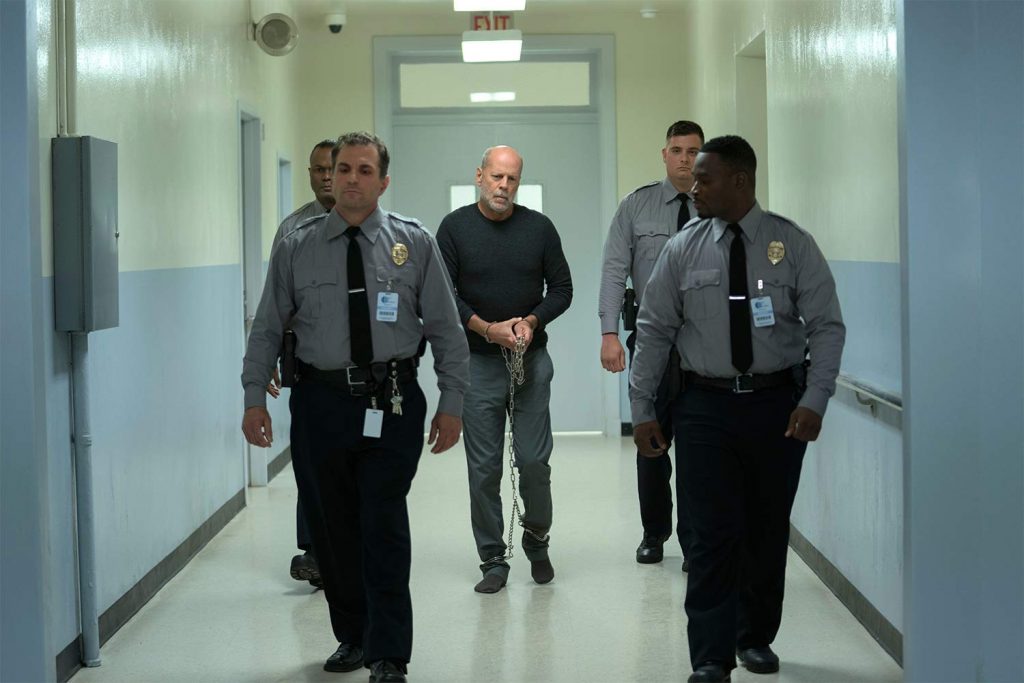 Glass is the perfect end to Shyamalan’s trilogy that we’ve wanted ever since ‘Unbreakable‘. He kept true to his tone and themes of the films, as well as each character that we’ve grown to follow and love for better or worse. Glass is a superb movie and dare I say one of the best films in the superhero genre. The Blu-ray itself has wonderful video and audio presentations and a wealth of great extras. This is a MUST-OWN Blu-ray!