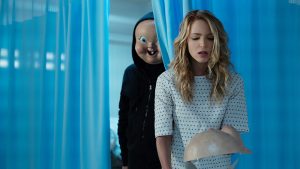 Snoring, and probably some drooling, too, opens and continues the Happy Death Day series with Happy Death Day 2U.  Is it Tree Gelbman (Jessica Rothe), a troubled college student, doomed to repeat her birthday (death day) over and over?  No, it is Ryan Phan (Phi Vu), the stranded roommate of Carter Davis (Israel Broussard).  Ryan heads to his room where he meets Tree and Carter with the same awkward question, “Dude, did you hit that fine vagina or wha…?” 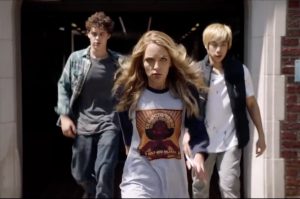 As most will remember that was part of the repetitive start to Tree’s neverending day.  A very interesting choice by Christopher Landon, the director, and co-writer, to start Happy Death Day 2U from the perspective of another character instead of Tree.  It played well especially for someone like yours truly who had not seen the initial installment before viewing.  The initial thought was that Ryan was the killer’s next victim.  Kudos to you for flipping the script, even on me, which rarely occurs!  In fact, not having seen the first film, I didn’t realize that the film was a comedy versus a straight horror or thriller.  Nice blend of comedy and tragedy.  Sticking with the prescribed definition of a sequel from Randy in Scream 2 (yes, I’m going there), Happy Death Day 2U offers new information that was not revealed in its predecessor.

The cast is virtually new to me yet solid performances all around.  Rothe returns to personify determination once again as Tree and nails the character from the jump.  This is my first exposure to Rothe, however, some of you may have seen her in La La Land or the TV show Gossip Girl.  She has grit and could become a force to be reckoned with in Hollywood.  Broussard was in an episode of the TV show Sons of Anarchy so that is the only reason he was familiar.  Vu has perhaps the most experience on the big screen of the bunch as he was in Pitch Perfect 2, Fist Fight, and Logan prior to Happy Death Day 2U.  He provides great comic relief along with Rothe and his lab buddies, Samar Ghosh (Suraj Sharma) and Dre Morgan (Sarah Yarkin).  Laughing is definitely in your future if you watch this film.  Aside from one headache-producing, really fast pan, in the beginning, the cinematography was engaging and flowed with the plot structure.  Solid special effects, dialogue, and soundtrack choices made the story come alive.

Overall, Happy Death Day 2U was interesting horror, comedy thriller that jolted the audience more than once (unfortunately, I was immune).  The creativity, in the vein of offing this birthday girl, was mind-blowing.  Essentially, Happy Death Day 2U is like Final Destination meets Groundhog Day meets Scooby Doo.  The viewer does not have to see part one to enjoy this sequel, but it wouldn’t hurt.  As I said before the humor was on point, my fave highlighted in the image below.  Not because Rothe is nearly naked, you perv, just watch what this Tree grow.

PREPARE TO DIE…AGAIN, AND AGAIN!!!