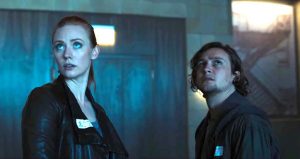 Puzzles are amazing. They push you to think and not just any ole thinking. You have to see through, around, up and down, probably why I love being a critic. Anyway, locks slide and toggles click as the screen fades in from black. Escape Room opens with a chessboard followed by a pan around an overloaded study, foretelling much. The sounds did not match the image that appeared. I wanted to like Escape Room…

Ben (Logan Miller), Mike (Tyler Labine), Zoey (Taylor Russell), Amanda (Deborah Ann Woll), Jason (Jay Ellis), and Danny (Nik Dodani) autonomously received their invitation to use their noggin were thrust into. The Minos Company offered $1,000,000 for the person that can make it through (survive more like it) a maze of intrigue and death first. Each of these players had their own enigmatic backstory sparsely sliced into the flow. Glimmers of whatever made each of them flashed across the screen to explain the near nameless bodies in front of the audience.

The bright ray of hope in Escape Room was Woll who I have enjoyed since HBO’s True Blood where it all began, for me anyway. Woll’s Goldilocks performance (it was just the right amount) definitely had the most depth. She brought Amanda to life. Woll can be seen getting to the bottom of the mystery on Netflix’s Daredevil series. A few surprises for better or worst were Ellis who you’ll remember from Insecure if you have HBO and a pulse. As Danny, he was a little too much and definitely brought to mind the late Bill Paxton (cannot believe he is gone) from Vertical Limit. Also, in a very creepy way, the cameo of Yorick van Wageningen as the Game Master was brief and resembled his performance in The Girl with the Dragon Tattoo (US version). The other actors are new, fresh, and green. However, Mike played by Labine jogged my member of his brief cameo in Zack and Miri Make a Porno (FOOTBALL!). 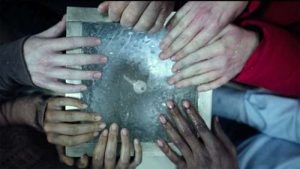 The plot structure as well as how the narrative was pushed along were ill-conceived and incomplete. The sequences’ fast pace to solve the room with unbelievably vague clues were annoying and flew by so fast that the solution was not noticeable or memorable. The creators tried too hard to one-up the horror genre. Escape Room was like Hellraiser, Cube, Saw, and Circle (films I repeatedly enjoy) were tossed into a blender set to puree. Aesthetically, Escape Room was beautiful and intricate (though some were overloaded). The premise was intriguing. The sound mixing had its ups and downs. The levels were so jarring viewers missed out of some of the action. The ending was poorly set up for a sequel and ran too long.

Overall the film just needed fine-tuning. By the way, if a person’s tibia is crushed, there is excruciating pain and no one would stand strong on that. With a running time of 1 hour and 40 minutes, you might want to hold your restroom break until after the film. Otherwise, you will be a little lost and more frustrated than some of the audience that sat through the whole thing.

HAD A CLUE, BUT MISSED THE MARK!!